Member Q and A – Glenn Clissold

When did you start supporting AUFC?
I first started supporting United in 2009.

What made you fall in love with the club and what made you become a member?
After a game against Melbourne Victory at Coopers Stadium I saw the passion of our players and the incredible fan support and just knew it was something I wanted to be part of as often as possible. The electricity at Coopers from the fans and players alike made me feel alive for the entire 90 minutes! I became a member after spending a game with the Red Army. They are such a great bunch of people to be around and I felt part of their family after just a few matches with them. I knew how intense their love for the club was and eventually that rubbed off onto me.

How long have you been a member of AUFC?
After my first year supporting the club, I decided it was something I needed to be part of. In 2010 I made the decision, so five years.

What has made you continue your membership?
It’s a commitment to the team and to the club. You give to them and they give back. Feeling part of something as big as Adelaide United makes me want to renew my membership time and time again.

Where do enjoy our matches from at Coopers Stadium?
I’m in the middle of the Red Army, Northern End… on a scaffold.

Who is your favourite player form our current squad?
It would have to be Jimmy Jeggo. He’s strong on the ball, works tirelessly, and us in the Red Army have a great song for him.

Who is your all-time favourite Reds player?
Cassio – the pocket-rocket was always there for the fans and gave 110% for his team and club. 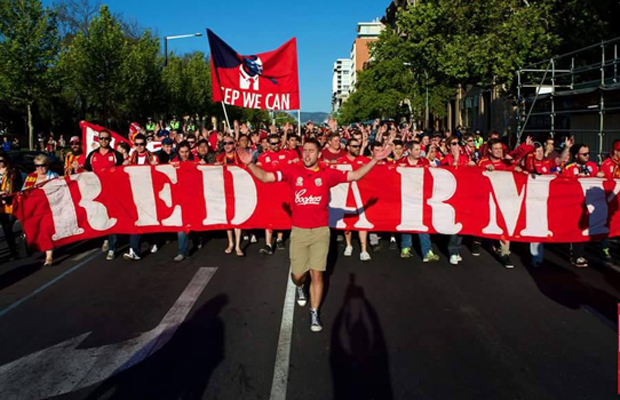 Which non-AUFC, but A-League, player do you secretly admire?
Aaron Mooy, he is just class in the middle of the park and has a great strike on him, especially from a dead ball situation.

If you could choose any footballer, past or present, to play for AUFC, whom would you choose and why?
This is a tough one and there are many choices, but I have to go with Paolo Di Canio. Di Canio is one of my favourite ever players, but his passion, charisma, and incredible skill with a football would be welcomed at the doors of AUFC without a doubt. Skill on the park would be great for us in terms of a striker, but his connection to fans would be hailed as nothing but glorious. Plus he’d keep the tabloids running with some of his escapades.

If you could say anything to a Reds fan who is thinking of becoming a member, but hasn’t yet, what would you say?
I would say become a member! If you want to feel part of something, then there’s nothing better than our football family. Being a member is more than just going to watch the game, it means becoming part of the club and showing your pride and passion for AUFC. That’s what becoming a member is all about.