Adelaide United suffered 3-1 loss against Perth Glory in controversial circumstances in Round 7 of the Hyundai A-League at nib Stadium on Friday night.

A Josh Risdon own goal put the Reds ahead but the lead was only momentary as Rostyn Griffiths equalised three minutes later, before a second-half brace from Andy Keogh handed Perth a contentious win.

Adelaide were reduced to 10 men after Jordan O’Doherty received a second yellow card, but not before Eugene Galekovic appeared to have been blatantly fouled in the build up to the Glory’s second goal.

Reds Head Coach, Guillermo Amor, named an unchanged starting XI for the clash resisting the temptation to alter his line-up in a bid to establish some continuity within the squad.

United started the stronger of the two sides, bossing the midfield and retaining possession of the ball in the early exchanges.

Sergi Guadriola was lively throughout the first-half, causing the Perth defence a number of headaches. The Spaniard’s first attempt saw him dribble at pace before unleashing a venomous shot just past the post and much to the relief of gloveman Liam Reddy.

However, the hosts soon grabbed the ascendency, pressing forward and applying a sustained period of pressure.

In a match which was an open, entertaining affair it was the Reds who opened the scoring. Some skilful work from Isaias released Tarek Elrich out wide before his deflected cross was turned in by Risdon on 22 minutes. 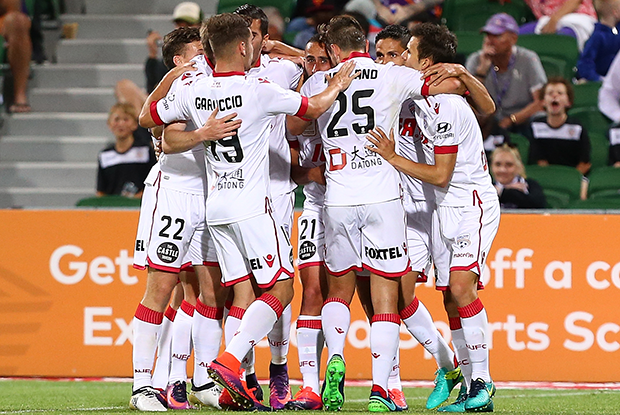 Yet the advantage was immediately extinguished in the 25th minute, as Griffiths capitalised on a half-clearance to drill his effort from outside the box into the bottom corner.

The encounter continued in an end-to-end fashion, with both sides nearly putting their respective outfits ahead just before the interval. Keogh first struck an audacious half-way effort in an attempt to catch Galekovic off his line, while Guardiola expertly wriggled his way through the Perth rear-guard only to strike a tame effort at Reddy.

The second-half picked up where the first period left off as both sides tried to break the deadlock. Isaias, in particular, stamped his authority in midfield and dictated the tempo for the Reds, like a maestro conducting an orchestra. Meanwhile, Marcelo Carrusca showcased his array of silky skills to leave a trail of Glory players in his way.

But fortune would soon turn for the Reds who seemed in control in the opening 15 minutes of the second stanza. Sergi Guardiola was unable to continue after sustaining an injury and eight minutes later Kenny Lowe’s men would find the breakthrough in debatable fashion.

Griffiths collided with Galekovic as he attempted to catch the ball from a crossing free-kick, forcing the United goalkeeper to drop the leather and fall into the path of Keogh who made it 2-1.

In the 71st minute O’Doherty would be given his marching orders for a second bookable offence, but despite Perth’s numerical advantage it was Adelaide who dominated.

The Reds showed immense character in search of restoring parity, but their endeavours unfortunately were in vain.

And as Adelaide pushed numbers forward in the final stages of the game, they left themselves vulnerable at the back. Perth duly profited as Keogh’s header rounded off a swift counter-attacking move in the 95th minute to consign Amor’s side to a fifth loss of the campaign.

Following the match Reds boss, Amor, who was sent to the stands for protesting the Glory’s second goal, said it was a disappointing result, but believed the team showed great determination when down a man.

“The result is 3-1 and it is not good and we deserved a better result,” Amor said.

“With 10 men we still had a chance to draw the game, we are there (competing well) in the game.

“Our players and our performance and attitude was fantastic, but I’ll repeat our players didn’t deserve this.”