Argentine-born Adelaide United star, Marcelo Carrusca, says he was shocked to hear Monday’s news that Lionel Messi is set to retire from the national team but added it might be a blessing for the Barcelona superstar.

Carrusca, 32, one of Australia’ top talents at the recently crowned Champions, returned to pre-season training today in Adelaide to be greeted by the shock news.

Earlier in the day after a heartbreaking shootout, Argentina lost to Chile in the Copa America Centenario final in the USA.

Messi missed his nation’s first penalty with Chile going on to win 4-2 on penalties after the game ended 0-0 following extra time in New Jersey.

Immediately after the game, an emotional Messi announced his retirement from the national team at just 29.

Messi told media of his disappointment at failing to land a major trophy with his nation after losing a World Cup final and last year’s Copa America.

“It’s not meant for me. For me the national team is over. I’ve done all I can, it hurts not to be a champion,” the global superstar told the media.

“It’s been four finals, I tried. It was the thing I wanted the most, but I couldn’t get it, so I think it’s over.

“It’s very hard, but the decision is taken. Now I will not try more and there will be no going back.” 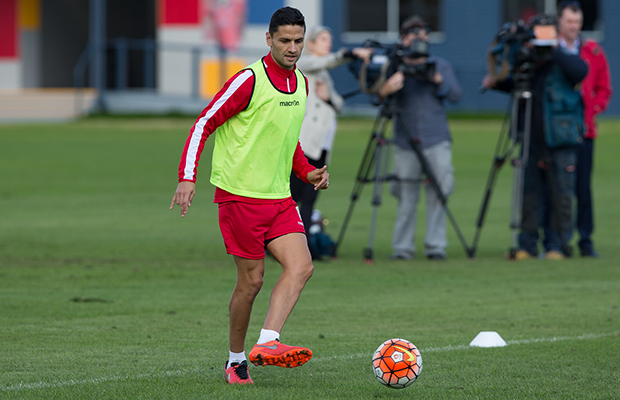 When told of the news, United’s Buenos Aires-born playmaker conceded it might be for the best but he held out some hope that the decision may be reversed in the future.

“First, it was a big surprise,” Carrusca told  www.a-league.com.au

“I think he’s tired,” added Carrusca, who won the Hyundai A-League Championship with Adelaide United last month and played for Argentina at the 2003 Youth World Cup in UAE.

“I don’t know if it’s a final decision but there is a part of me in my soul that thinks it’s a good decision because he was suffering for many years [with Argentina] and now all the weight is off his back.

“Though it’s difficult to be him, I hope it’s not true and I hope to see him again in the national team.”

Carrusca added Messi is young enough to play at another World Cup and perhaps that might force a change of heart down the track.

“For me he can play till 33,34 [years old] at the same level I think.  It’s a big loss for Argentina because without him we have good players but it’ll be a big difference.

“I think maybe it’s too quick a decision but I don’t know,” said the former Galatasaray player.

“Argentina have some great players but Messi is at another level and now with him gone it’ll be twice as difficult.”

And Carrusca had a shot at the media critics from Argentina who have criticised Messi for his performances with the Albiceleste.

“The people in the media have already said, ‘don’t go, don’t go’ but these are the same people who maybe kill him every time.

“So it’s difficult, because no-one knows what he [Messi] is thinking.  And it’s not easy to be him but I hope for every Argentinian that he continue in the national team… but I understand if he doesn’t do it.”