Sergio Cirio dispatched a stoppage time penalty to secure a last-gasp 2-1 victory for Adelaide United over Brisbane Roar at Coopers Stadium on Sunday.

Baba Diawara opened the scoring with a first-half header, before Jamie Maclaren levelled proceedings on the hour mark.

However, deep into injury time Roar gloveman Michael Theo was red carded for an alleged elbow on Dylan McGowan inside the penalty area, allowing Cirio to calmly slot the subsequent spot-kick.

Marcelo Carrusca was also dismissed from the match after being brandished a second yellow card eight minutes from time.

There were three changes made to the starting XI by Head Coach, Guillermo Amor. Michael Marrone replaced Ben Garuccio in defence, Mark Ochieng received his third start of the season superseding Nikola Mileusnic, while Marcelo Carrusca returned to the midfield.

Adelaide started the stronger of the two sides in the stifling heat, but were unable to produce any genuine sightings at the Roar goal.

Diawara made it 1-0 with a 16th minute header to score his second goal in as many matches and open his account in the Hyundai A-League. The striker made a darting run to expertly head home at the near post from Carrusca’s corner.

Taylor Regan was excellent at the back marshalling the defence as well as making several crucial interceptions to thwart Brisbane’s incursions into the box.

Eugene Galekovic was called into action for the hosts when he parried Brandon Borrello’s dangerous cross away from Maclaren which would have been a simple tap-in for the number nine.

With the Roar dominating possession, Adelaide threatened on the counter-attack and nearly doubled their lead.

A deft touch from Carrusca played in Ochieng whose low ball saw Diawara almost pull off an audacious back-heel attempt.

United went into the break with a slender one-goal advantage. 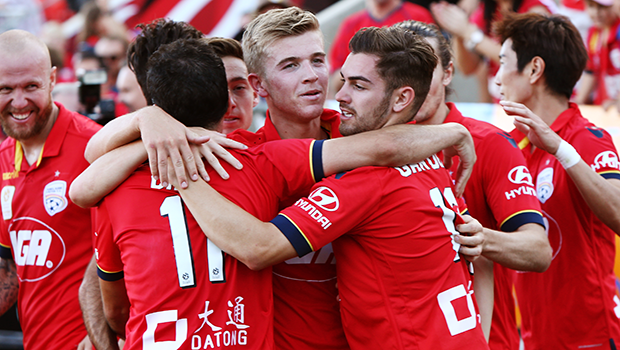 The second-half saw the Roar continue to push for an equaliser and they were rewarded soon after.

Riley McGree tried to put Adelaide ahead but his thunderous shot went astray.

But Adelaide would grab a winner in the last kick of the game, when Cirio converted a last-minute penalty to seal the triumph after Theo fouled McGowan.