Adelaide United secured its second consecutive Hyundai A-League victory with a resilient 3-2 win over the Central Coast Mariners in Gosford on Saturday.

Three goals in 10 minutes, courtesy of Baba Diawara’s brace either side of a Dylan McGowan header enabled the Reds to overturn a first-half deficit and lift the visitors off the bottom of the ladder.

Diawara netted an equaliser when he was quickest to react inside the area, cancelling out Kwabena Appiah’s header, before McGowan and the Senegalese forward scored a header each off two brilliant corners.

Roy O’Donovan converted a stoppage time penalty, but it proved a mere consolation. 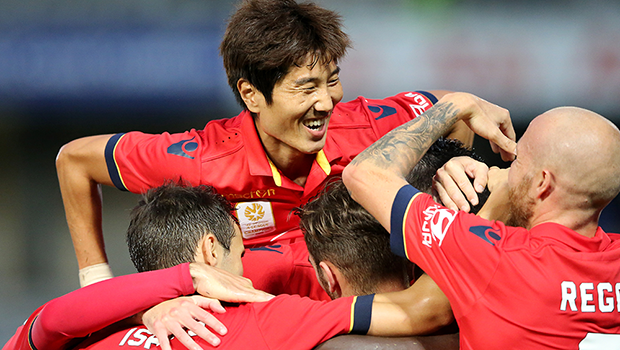 Four changes were made to the starting XI by Head Coach, Guillermo Amor. Isaias returned to the base of the midfield after a six-game injury lay-off, while Jesse Makarounas replaced the suspended Marcelo Carrusca, to receive his first start since Round 10. Nikola Mileusnic was restored on the right wing and Ben Garuccio featured at left-back.

Adelaide had the first opportunity of the clash with a stinging effort from Mileusnic which forced Mariners gloveman Ivan Necevski into a smart save.

Michael Marrone was dynamic as well during the first period, venturing forward and causing a number of problems for Central Coast’s defence.

It was an end-to-end first-half with both teams creating half chances but largely lacking end product.

Adelaide went inches away from opening the scoring when an outstretched Diawara could not steer home Sergio Cirio’s low cross.

And the Mariners would make Adelaide rue that miss a minute later as Appiah headed home Storm Roux’s inch-perfect cross.

The second-half saw the Reds really alter the complexion of proceedings. They began to dominate the Mariners in transition and appeared to play with more confidence going forward.

On 56 minutes, United would restore parity through Diawara, after the ex-Sevilla man capitalised on a defensive error from Cirio’s cross to dispatch a clinical finish.

The Reds would continue to press for a second and were duly rewarded five minutes later. Jesse Makarounas delivered a pin-point corner for McGowan, who rose highest to expertly thump his header into the net to make it 2-1.

The one-goal advantage was doubled in similar fashion on 61 minutes after Diawara directed his header into the far post, this time from a Garuccio corner. It was the 29-year-old’s fourth goal in three matches in all competitions to complete the impressive comeback for Adelaide.

Eugene Galekovic was called into action late on to deny Roux’s effort after a sensational run, in what was a strong outing from the shot-stopper in his 250th Hyundai A-League appearance.

In the 90th minute, O’Donovan scored a spot-kick after a handball from Kim Jae-sung, making for a nervous finish for Amor’s side.

The Mariners had one last attack but it failed to test Galekovic, as the Reds held on for their maiden away triumph of the season.