Adelaide United defender Tarek Elrich believes the Reds are close to securing their first win of the campaign, ahead of their Round 9 meeting with Wellington Phoenix at Coopers Stadium on Sunday.

Adelaide produced a promising performance against ladder leaders Sydney FC last weekend, and were rather unfortunate not to have collected all three points as the clash ended goalless.

Despite remaining winless after the opening eight rounds, Elrich maintained that confidence was still high within the dressing room.

“Obviously we played against the league leaders Sydney FC away from home and I think we were the better team,” Elrich admitted. “We probably should’ve come away with the win.

“There’s still plenty of belief and you look at the training sessions the tempo is getting faster and faster.

“A lot of the boys are fighting for their position and the competition for places is there.”

Elrich is adamant the match against the Phoenix will be a difficult encounter and insisted the team is just focusing on one match at a time.

“Hopefully we can go on the same run as we did last season and hopefully one better because last season we lost a game during that run,” Elrich said. 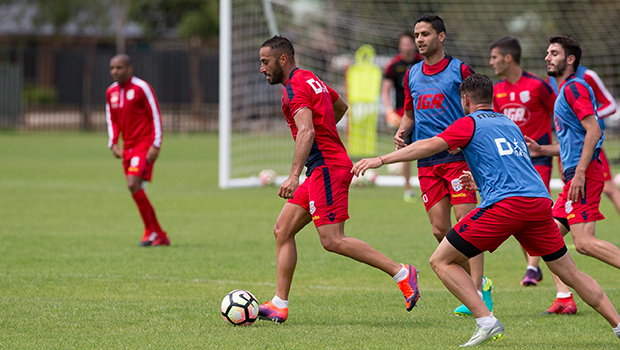 “We have to take each match game by game. Wellington are no easy beats and they’re a great team.

“I think they’ve (Wellington) been unlucky on the receiving end of a few losses and Guillermo (Amor) has made the point that this game will be harder than most.”

The 29-year-old is also optimistic an elusive victory is imminent, revealing the necessity to keep a second consecutive clean sheet will go a long way to sealing the triumph against the New Zealand outfit.

“I think we’ve been playing some great stuff, put aside that second-half against the Central Coast Mariners that we played, everything else has been pretty good,” he said.

“We haven’t been taking our chances and we’ve been punished at the other end.

“The positives to take out form the weekend (against Sydney) is that we kept a clean sheet and that’s something we spoke about.

“And now let’s go one better and keep a clean sheet and get a positive result.”

With boss, Guillermo Amor’s, touchline band extended for another match, Elrich said the loss of the Spaniard from the sidelines should have no impact on proceedings.

“He’s still doing the video sessions and taking the team meetings so we’ve got a game plan we’ll follow this weekend,” Elrich continued.

“And he’ll give us plenty of instructions beforehand so nothing changes.”

Adelaide United host Wellington Phoenix in Round 9 of the Hyundai A-League 2016/17 season on Sunday, 4 December at Coopers Stadium. Kick-off is at 6.30pm ACDT.