Sergi Guardiola netted his third goal in as many matches to rescue a deserved point for Adelaide United against Brisbane Roar in Round 6 of the Hyundai A-League at Coopers Stadium on Friday.

A Brett Holman strike had given the visitors the lead, however with 12 minutes remaining Guardiola’s header ensured the Reds would not go home empty handed – halting a four-match losing streak.

Reds Head Coach, Guillermo Amor made two changes to the starting XI for the match against the Roar, with Marcelo Carrusca and James Holland returning at the expense of Jesse Makarounas and George Mells.

The added experience in the centre of the park appeared to aid Adelaide as they dominated the opening exchanges, stringing a number of crisp passes together.

Without creating any clear-cut chances in the first 20 minutes of the match, the likes of Ben Garuccio, Marcelo Carrusca and Jordan O’Doherty all looked to venture forward and cause Brisbane problems down the right flank.

In what was largely a tight affair during the first-half, the game did begin to open up and as a result chances would ensue. The Roar’s Brandon Borrello unleashed a fierce strike towards Eugene Galekovic, though the gloveman parried the shot away to safety.

Moments later, Isaias attempted to catch Michael Theo off-guard from a crossing free-kick, as his curling effort brushed the top of the net. Meanwhile, Tommy Oar was lively for the Queensland based outfit, involved in a number of attacking moves as well as trying his luck from distance on several occasions.

Two minutes before the interval, the Reds missed a glorious opportunity to draw first blood when Isaias’ set-piece found Dylan McGowan free in the box, but he was unable to direct his header on target. 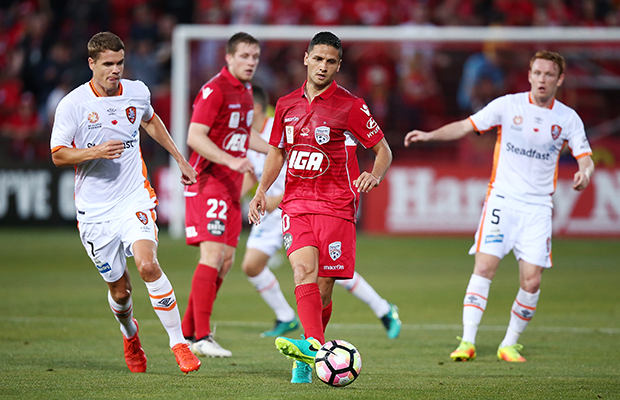 The second-half saw United quickly stamp their authority on the match, going on the front foot in search of a goal. However, following’s Adelaide dominant period, Brisbane nearly scored on 55 minutes had it not been for Luke De Vere’s wayward volley.

Yet the Roar quickly put that miss behind them when Holman scored from outside the box on 60 minutes, after Matt McKay’s persistence to retain possession. Despite conceding, Adelaide continued to press for an equaliser, as their intensity lifted to another gear.

Head Coach, Amor, turned to his bench and brought on Nikola Mileusnic and Riley McGree. Mileusnic, making his Reds debut, made an immediate impact and showcased his blistering pace on the wing by finding a yard of space on his opponent, before drilling a dangerous low-cross and forcing Theo into action.

And after a sustained period of pressure, the Reds would justifiably restore parity through Guardiola. The Spanish striker peeled off his defender to connect with Garuccio’s sumptuous cross and send the crowd into a frenzy.

The final few minutes witnessed an end-to-end contest, but neither team could find a winner as the intriguing Remembrance Day encounter finished 1-1.

Following the match, Reds boss, Amor admitted he was pleased with the reaction from his players, after a four-match winless run as well as falling behind during the second-half against John Aloisi’s men.

“We’d prefer to win, but after the four games that we lost, not losing today was better,” Amor said.

“The level of performance from the team was good, our players worked very well and our players gave everything.

“The reaction was important and this team has always had this, last year and this year, the team wanted to win.

“Today we were losing and then we ended up getting a point which was good.”