Adelaide United’s winless start to the season is over after Henrique scored a stunning brace in a 2-0 defeat of Wellington Phoenix at Coopers Stadium on Sunday.

The Brazilian lashed home two sweet first-half strikes to lead the champions to a drought-breaking first victory, in the process leapfrogging Wellington into ninth.

The visitors had an ideal chance to go ahead on 20 minutes when Dylan McGowan tripped a surging Adam Parkhouse, but Reds captain Eugene Galekovic parried away Roy Krishna’s penalty.

From there it was the Henrique show as the former Brisbane Roar forward hit a pair of classy first-time efforts from outside the area in a dominant 15-minute period. 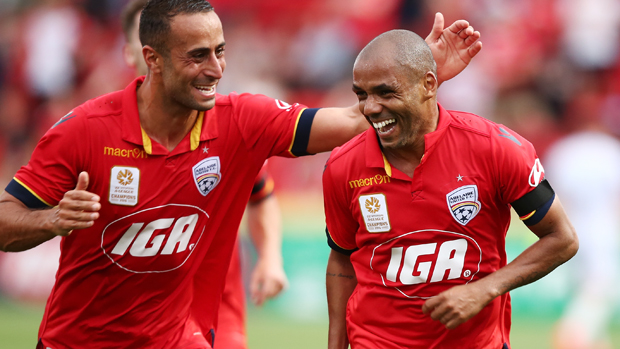 The Reds enjoyed late chances to extend their advantage but it mattered little as the reigning double-winners did enough to climb off the foot of the ladder.

After a goalmouth scramble inside the Wellington penalty area, Adelaide worked the ball to Henrique on the edge of the area and the Brazilian unleashed a left-footed bullet beyond the outstretched Glen Moss.

More brilliance from the Brazilian as he again gave Moss no chance with another first-time blockbuster, curling a short free-kick into the corner from long range.

For the second straight week, Phoenix forward Roy Krishna failed to convert his first attempt from the spot. This time he didn’t get a second bite and it cost his side the lead.