Member Q and A – Johnny Parini

When did you start supporting AUFC?
I started supporting United after I attended my first game, which was against Melbourne Victory in season 2005/06, Round 3 at Coopers Stadium. Louis Brain got the winner for us in the first minute and then Richie Alagich got sent off in the 15th. We held on for the win and it was amazing.

What made you fall in love with the club and what made you become a member?
My first AUFC game was the first football game that I’d watched and from that moment I fell in love with the sport. Then I fell in love with the club because I enjoyed the atmosphere, which I hadn’t experienced at any other sporting matches I’d attended before. After going to each home game for the next three seasons, by purchasing tickets at the gate and sitting in general admission with my parents, I saved up my birthday money to purchase a membership and haven’t stopped since.

What has made you continue your membership?
I have continued my membership with the club for eight years because of my love for the club, the culture, and the atmosphere at all the games and special member events.

What is your favourite memory from a Reds match?
My favourite memory of a Reds match was our AFC Champions League Semi Final against FC Bunyodkor (formerly PFC Kuruvchi) when we won 3-0. I attended the game with my brother and we were standing behind the Bunyodkor away supporters the whole time. My favourite moment from the match was when Cassio was awarded a penalty. He was laying on the pitch with his arms pointing into the air. We’d already scored two second half goals and the penalty was the chance to seal the win and Cristiano converted it. When the final whistle was blown it was incredible. Eugene Galekovic was cheering with all of us behind the goals and I threw my cap in the air before giving high-fives and celebrating with fans I had only just met. I know it will always stick in my mind. 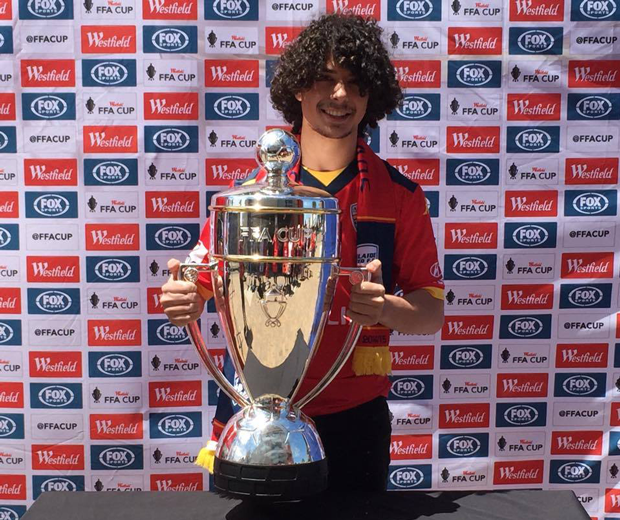 Where do enjoy our matches from at Coopers Stadium?
I watch the matches from the Western Grandstand, with the occasional game sitting in GA with family and friends.

Who is your favourite player form our current squad?
It has to be Eugene Galekovic.

Which non-AUFC, but A-League, player do you secretly admire?
I really only admire players who play for our club and wear our colours. But I do secretly support our ex-players still playing in the A-League or even abroad and hope they do well in their post-United football careers. The exception is of course if they play us again.

If you could choose any footballer, past or present, to play for AUFC, whom would you choose and why?
I would love to see Lionel Messi playing under Guillermo Amor at Coopers.

If you could say anything to a Reds fan who is thinking of becoming a member, but hasn’t yet, what would you say?
I would recommend them to purchase a membership as soon as possible because it is the best way to support our great club. For this season there are many membership options and the three-game membership, in my opinion, is the best for a first time member to get them hooked. The new options have helped me encourage more family and friends to sign up this season. It’s just a great thing to be part of.

If you’re an Adelaide United member and would like to feature on aufc.com.au, please email the club at info@aufc.com.au