Adelaide United is delighted to officially announce the signing of young South Australian, Ben Garuccio, until the end of the 2017/18 season.

Garuccio, 21, who left South Australia for the Australian Institute of Sport before signing for Melbourne City, joins the Reds after a very strong 2015/16 season.

A versatile left-sided footballer, Garuccio can play both as a fullback or as a winger with his blistering speed a notable component to his game.

In 2015/16, Garuccio made a total of 21 appearances for Melbourne City, scoring one goal. 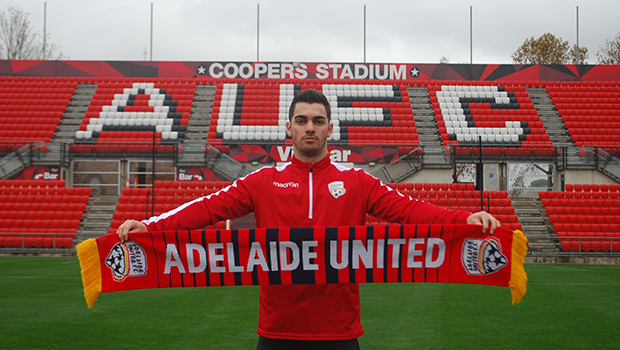 Speaking on signing for United, Garuccio said: “To be back in Adelaide and to be playing for the team that I supported when I was a little kid is very exciting for me.

“With football you never really know where you’re going to end up and it’s not as if you can really pick and choose where you’ll play. But to have signed with United is a great feeling.

“The team had an incredible season last season and had some really tough matches against Melbourne City so I know how much talent is in the squad.

“The season is still a while away and there’s a long pre-season to go through, but I can’t wait to get out there and get back to playing and training hard.

“If you ask any player in the A-League, playing at a full Coopers Stadium is one of the hardest grounds to visit.

“So to come back and play my football here is something I’m really looking forward to because I’ll also get to play in front of my friends and family too.”

“Ben has been identified as one of the brightest young talents in the A-League and the potential he has is fantastic.

“Having signed a player that is versatile on the left flank, Ben is a great addition to our squad and he has the opportunity to fill the void left by the departed Craig Goodwin.

“Not only can Ben get forward and hurt teams with his pace, his composure on the ball when in defensive positions is very sound.

“Being from South Australia I’m sure Ben will settle back home very quickly and will flourish in our environment in no time.”