Adelaide United and Wellington Phoenix have been forced to settle for a point apiece after playing out an entertaining 2-2 draw at Coopers Stadium on Sunday afternoon.

In a match played in oppressive conditions, Adelaide raced out of the blocks and took an early lead with youngster Riley McGree netting a powerful strike.

Wellington settled and hit back almost immediately with fullback Tom Doyle embarking on a superb solo run before thumping a fizzing effort past Eugene Galekovic.

After a fast-paced opening, the tempo of the game slowed considerably with Adelaide enjoying large periods of dominance in the opening stanza without truly testing Glen Moss in the Phoenix goal.

And the hosts were made to pay for their wastefulness with Roy Krishna firing Wellington ahead just before the break with a well-taken goal after a lightning counter-attack. 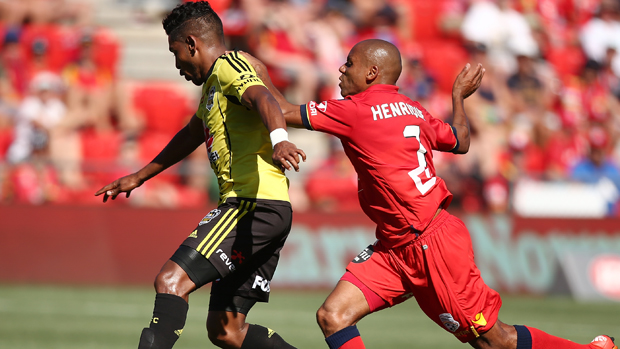 Adelaide continued to press after the break and should have restored parity with Sergio Cirio and Iacopo La Rocca spurning brilliant chances to equalise midway through the second half.

But their pressure eventually told with substitute Nikola Mileusnic bundling the ball home from close range after Ben Garuccio’s free-kick ricocheted off the post.

Sergio Cirio had a chance to net the winner in the final minute but screwed his effort wide as both sides were forced to settle for a point.

Sergio Cirio surged into the box before finding Marc Marino on the edge of the area with the attacker teeing up McGree. The youngster thumped a powerful first-time effort which flew into the back of the net, with a slight deflection leaving Glen Moss with no chance.

Doyle surged forward down the left flank, showing great feet to beat a host of Reds defenders before firing a swerving left-footed effort which whistled off the post and into the back of the net.

Phoenix burst forward after winning the ball inside their own half with Roy Krishna played in behind the Reds defence by Kosta Barbarouses before calmly slotting past Eugene Galekovic.

Ben Garrucio’s free-kick was pushed onto the post by Glen Moss with the rebound falling kindly to Mileusnic who fired the ball home from close range.

Wellington could have all but sealed the win on the stroke of half-time with Kosta Barbarouses failing to capitalise on a clear-cut opportunity. The Kiwi attacker was played through on goal and looked certain to score but failed to fire a shot on goal after unsuccessfully attempting to round Reds keeper Eugene Galekovic.