Western Sydney Wanderers came from two goals down to salvage an entertaining 2-2 draw against Adelaide United at Coopers Stadium on Saturday night.

Trailing 2-0 at the break, the under-strength visitors turned in a second half display to deny Adelaide a positive end to their nightmare title defence.

Tony Popovic rested a raft of key players and the hosts exposed Wanderers’ unfamiliarity early as Marcelo Carrusca scored from the spot before Dylan McGowan doubled the advantage in the 38th minute.

Eugene Galekovic denied Wanderers a way back into the game on the stroke of half-time, producing a vintage low save to keep out Nico Martinez’s penalty.

Western Sydney pulled a goal back through skipper Dimas just after the hour and were level when Steven Lustica converted the match’s third penalty.

The draw means the reigning champions conclude their campaign in ninth, while Wanderers moved at least momentarily ahead of Perth Glory on goal difference.

After Aritz Borda chopped down Eli Babalj in the area, Carrusca stepped up and stroked the resultant penalty into the top right corner.

McGowan, staying forward as Carrusca’s corner bounced around the area, stuck out a boot to convert Sergio Cirio’s drive. 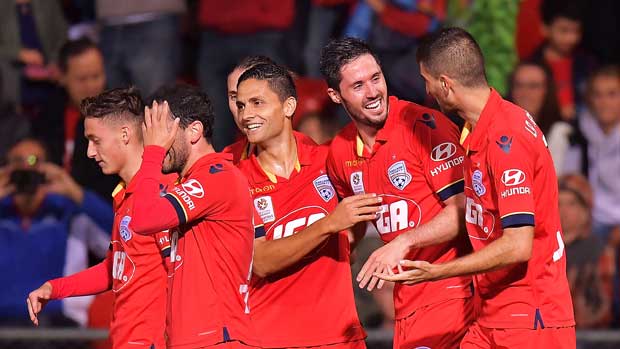 Dimas chased in Lustica’s free-kick and was perfectly-placed to nod home when it rattled back off the crossbar.

Iacopo La Rocca gave away his second penalty of the night, clattering into Shannon Cole and affording Lustica the chance to equalise from the spot.