Taylor Regan is expecting Adelaide United to be in for a tough, physical Quarter Final meeting with Heidelberg United in the Westfield FFA Cup at Olympic Village on Wednesday night.

The Reds will be wary of the threats Heidelberg pose having already claimed a Hyundai A-League scalp in Perth Glory, as well as lifting the local cup and crowned premiers of the National Premier Leagues Victoria.

Adelaide are yet to concede in the cup competition after registering 1-0 and 3-0 wins over Newcastle United and Melbourne Victory in the Round of 32 and last 16 respectively.

Meanwhile, the Bergers, who advanced from the Round of 16 on penalties against Sydney United 58, missed out on securing a domestic treble following an extra-time 2-1 loss to Bentleigh Greens in the Grand Final on Sunday night.

Regan said the Reds will be doing everything in their power to ensure they progress to the semi-finals for the second time since the tournament’s inception.

“The FFA Cup is an important competition,” Regan insisted.

“Not just for the A-League teams but also for the NPL teams and amateur teams around the country.

“We’re in the final eight now and a win gets us in the top four and I think that’s a great start to the season.”

Regan refuted claims it will be an easy game, stating Heidelberg have a number of quality players.

“They’ve got a richer history than arguably all the A-League clubs,” he said.

“They’re a big club, they’ve got some very good players, plenty in my opinion that are good enough for the A-League.

“That’s the nature of the beast now, there’s plenty of talent in all the NPLs and it’s our job to go there and show why we train full time.

“And why we get paid to do this professionally and that’s what we’re out to do.” 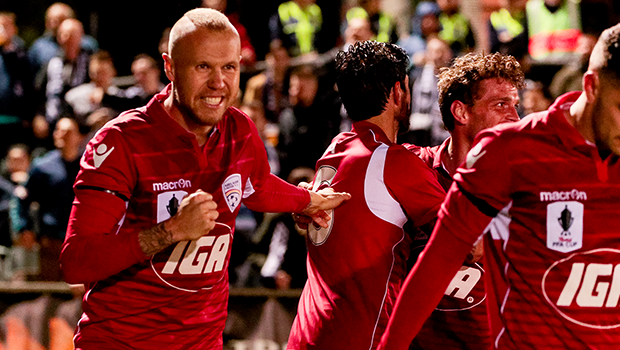 The 28-year-old centre-back also admitted a match of this scale is ideal preparation ahead of the Hyundai A-League season which commences next month.

“It’s great preparation, they take this very seriously,” he said.

“They’ve done well in the past in this competition and they’re looking to do the same again this year.

“It’ll be a physical game… But we’re ready to go.”

The 32-year-old is in line to make his Adelaide debut against the Melbourne-based outfit.

“He’s a very good player,” Regan said of Matmour, who has amassed over 270 Bundesliga appearances across the German top-flight and second division.

“He’s smooth, he’s classy and if he gets some space he’s very exciting to watch.

“Hopefully he can turn it on, the ground isn’t going to be amazing we know that and the conditions – it’s apparently raining.

“But look he’s a good player and if he can get on the ball and get some space he’ll do some good things.”

Adelaide United will face Heidelberg United in the Quarter Finals of the 2017 Westfield FFA Cup on Wednesday, 13 September at Olympic Village. Kick-off is at 7.00pm ACST.