Adelaide United Women Head Coach, Huss Skenderovic, is full of confidence ahead of the first away game of the 2016/17 Westfield W-League season against Western Sydney Wanderers Women at Marconi Stadium on Sunday.

After the six-goal thriller against Melbourne Victory Women at Coopers Stadium to open the campaign, the Red’s Women will look to return to Adelaide with a win over the Wanderers, beholding an impressive start.

Boss, Skenderovic, emphasised on the team’s luck to have the week break after their first match, before readying themselves to step back into W-League action in the Harbour City this weekend.

“It was a blessing to have the week off after our game against Melbourne Victory Women,” Skenderovic said.

“It gave us the great opportunity to work on and stamp our tactics and game plan before we face Western Sydney Wanderers Women.

“We also had the chance to make a full recovery over the past week, and we are looking fresh and are set for our next match.”

Skenderovic has a firm belief in his football tactics, especially after his time overseas, which guided in the development of his refreshing tactics that are certain to lead the Adelaide United Women to success this season.

“I believe after coming back from overseas, and watching how football is played over there, that fast-paced and less possession based football is the key to winning games,” Skenderovic continued. 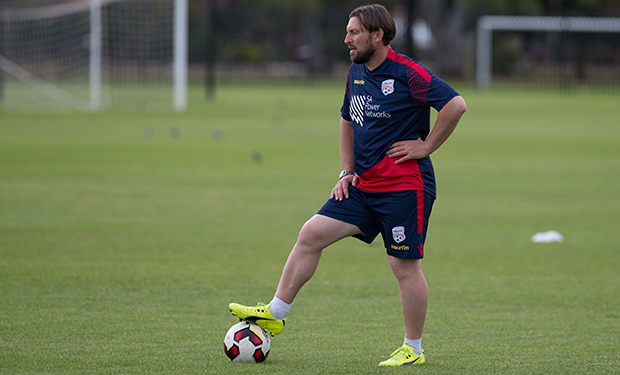 “We have the calibre within squad to play this type of football, being direct, and sending it behind defenders, to then score goals.

“Goals win the matches, and that is essentially what football is about, and to enjoy it, you must win games.

“And by winning games, you win trophies, and as a team, this is what we want to do this W-League season.

“We don’t want to be a predictable team, and by playing the tactics to their strengths, we can put our opposition off.”

“This style of play will assist in the player’s growth as a footballer, and as they play in higher levels, it is not about the developmental side, game play then becomes more difficult.

Ahead of their visit against Western Sydney Wanderers, Skenderovic remains convinced that his side can use these tactics to their advantage, paired with the tenacity and prowess, to come away with the deserved three points.

“We know that it will be a challenge away from home against Western Sydney, but we are confident in our ability to get the job done.

“With the depth and experience in our squad, it is possible we can be victorious this weekend, as we know we can create chances and score those much-needed goals.”