Why Isaías is indispensable to Adelaide United

The influence Isaías has had on Adelaide United since joining the Club in 2013 cannot be underestimated. Having reached the highest level, featuring a handful of times for Spanish outfit Espanyol in La Liga, Isaías’s top flight experience has proven invaluable to the squad.

So when it was announced Isaías was remaining at Coopers Stadium for a further three years, it was music to the ears for all Reds supporters.

Week after week, he continually manages to produce performances which never cease to amaze. He is the epitome of consistency and wears his heart on his sleeve whenever donning the Reds jersey – playing with pride, passion and elegance on the ball.

It is why he has been arguably the Reds most significant player, playing a pivotal role between the defence and the attack, occupying the centre of the park with aplomb. Isaías has been a vital cog in the Reds’ engine room, dictating the tempo of matches for nearly four years at the Club and like a fine wine is seemingly getting better with age.

His exquisitely struck free-kick in last year’s Hyundai A-League Grand Final – which curled into the top corner – sending the home crowd into jubilant scenes at Adelaide Oval, rounded off a fabulous season for the Spaniard and the Club.

But while many fans appreciate the work he does with the ball, the Spaniard is equally effective without it. In his quest to quickly regain possession for his teammates, he has the ability to break up play, as well as halt and delay attacks. The passing maestro aptly screens the back four, offering a reprieve to Adelaide’s defensive unit when under pressure.

Despite the team struggling collectively for form this season, the statistics behind Isaías’ start to the Hyundai A-League 2016/17 campaign reveal his performances are extraordinary similar to last year’s unprecedented title winning success.

By the numbers, a statistical breakdown of Isaías’ stats this season so far: 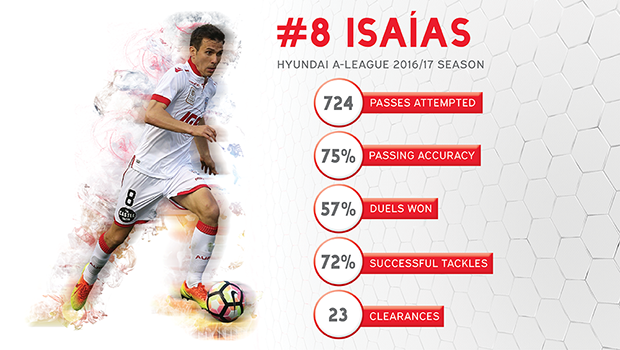