The Adelaide United Youth Team were defeated by West Torrens Birkalla 2-0 in Round 13 of the National Premier League on Saturday.

In a match that was full of intensity and a show of immense footballing quality, both Adelaide United and West Torrens Birkalla set their sights on taking the three points in what was proved to be a tough contest for possession.

Despite Blake Carpenter’s dominance on the left wing, the authority of Jordan O’Doherty and Jordan Elliott in midfield, and the strength of Clifford Maina and Jordan Maricic defensively, it was Birkalla’s Fumiya Suzuki that broke through United’s defence and a swerve into the back of the net by Ian Kamau which finalised their win, as the Young Reds were unable to gain reward for their chances.

It had taken almost 45 minutes for the game to see a goal, as the match started an all-out battle for the ball. Carpenter was pivotal down the wing as he made countless crosses into the box, even with a tough man to mark, John-Paul Cirillo, at his feet relentlessly.

An early cross from Carpenter found Alec Maiolo which gave the Young Reds a great burst of energy and positive mindset. Samed Altundag then linked up with Carpenter to attack early on. Ryan Yates’ header gave Birkalla their first chance on goal, but the defensive pressure of United forced the ball out of play.

Both teams pushed and worked hard on the ball, as chances were made continuously throughout the match. United continued to defend well under Birkalla’s attacking pressure as O’Doherty cleared the ball across the park and out of their final third. Zack Gomez then intercepted a promising Cirillo cross with a header in the 17th minute.

Carpenter did not slow down on the wing, as he made two more crosses for Maiolo that saw Julian Torresan win the ball before they could capitalise. Suzuki was the first to come close to Daniel Margush which looked costly.

Two minutes after Kamau’s header went too high over the crossbar to create any urgency for the Reds. Suzuki then made his way through and past Margush for a 42nd minute goal. Before the end of the first half, Apostolos Stamatelopoulos tried skilful footwork to pass defenders, but was outnumbered.

As play resumed it was much of the same, both sides putting forth the pressure. O’Doherty made a clean pass to Carpenter whose promising chance was too wide. 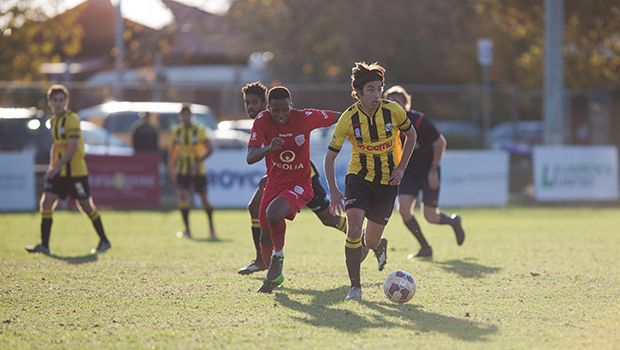 In the 59th minute, Cirillo’s shot was saved by Margush to keep his team in the game. O’Doherty then tried his on shot well within range, but was just wide of the post. New United signing Marc Marino had his first run as a Red with some nice touches that assisted with possession.

Just as things looked promising for the Young Reds, Birkalla then put on more of their attacking pressure which saw Kamau curve his shot into the back of the net in the 72nd minute to end the battle.

United Youth Team Head Coach Mark Jones, said his Red’s worked hard for the ball, but it was that little bit extra that needed to be achieved for a win.

“We worked just as hard as Birkalla, but it was just those lapses that were made that saw the goals,” Jones said. “It was even sided, for example when they had the early parts of the first half, and we came back into control in the second.

“We had control of possession at times, it was just the lack of a bit of silk to get us through.
“I’m not disappointed in the performance, there was a lot of adversity today as well as injuries and new players coming in.

“The chances are being created, we just need those goals to be scored. We will work on that ahead of the next match against South Adelaide.