The Adelaide United Youth Team were defeated 3-1 by South Adelaide in a Round 14 battle of the National Premier League on Saturday.

The clash between the Adelaide United Youth and South Adelaide played out as expected, a tough and intense physical battle for the ball. But it was South Adelaide whose shots found the back of the net, Jonathon Rideout, Alexander Rideout, and Liam Molesworth the firing party.

Despite Marc Marino getting one back and scoring his first as a Red, it was not enough for any points.

The Young Reds started the first half promising, as Ryan Strain had the ball at his feet inside the box several times while Alec Maiolo made numerous runs down the wing and delivered a number of promising crosses into the box. Midfielder, Riley McGree, was back in the line-up and proved a crucial part of the squad, his dominance in position created attacking opportunities and effective possession.

The Panthers then decided not to let their opposition have it easy and bit back through Christopher Reed, who headed the ball dangerously towards Daniel Margush from a promosing corner.

In the 10th minute, Maiolo showed some flair when he flicked the ball to Jordan O’Doherty, whose strike went just over the crossbar.

It was tantalising for both sides, when South Adelaide had another chance through Jonathan Moore, and then Jonathon Rideout, but Margush slid in to save with urgency.

Maiolo and Strain then worked to play to Marino in the 17th and 19th minutes, but both chances were denied. Apostolos Stamatelopoulos also played a pivotal role in attack, his first chance intercepted by a defensive header. Jordan Maricic went to great depths to keep the score level, but Jonathon Rideout made his way through 26 minutes in for a goal.

In the 33rd minute, McGree found Stamatelopoulos when his shot came off a defender. A second chance looked certain for Stamatelopoulos to equalise, but his header was too high. 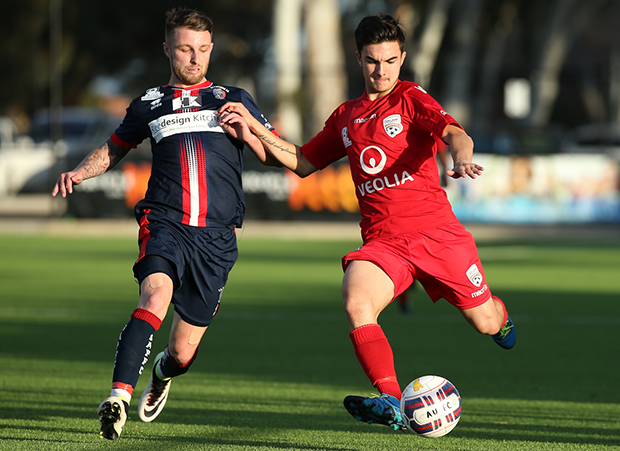 Not long after, Molesworth shot on goal, giving South Adelaide a 2-0 lead. The Reds tried to answer back with McGree’s precise pass to Marino, who was just tackled inside the box minutes before half time.

Substitute, Blake Carpenter, showed pace and strength down the wing, and also expertly assisted Marino to volley in his cross into the back of the net. Aladin Irabona debuted for his new team and made a good first impression, as he almost had his name on the scoresheet. The chances did not end all second half, but the score remained 3-1 at 90 minutes.

Following the match, United Youth Team Head Coach, Mark Jones, said his side’s loss simply came down to his players not wanting to win as much as their opponents.

“It is disappointing and there wasn’t enough desire to win which is not like the boys,” Jones said. “We did start the game off well, but didn’t make the most of those goal scoring opportunities, and didn’t work hard enough to do so.

“Sometimes you do need that little bit of luck to score, but goals don’t just happen, you need to work for them.

“We let in those three goals way too easily, there wasn’t enough defensive structure or discipline.

“I haven’t been this disappointed in a while with the team’s performance, but now we will have to work extra harder ahead of what will be another challenge next week against MetroStars.”