Sergio Cirio’s dramatic last-gasp penalty snatched an unlikely three points for the Reds, but not before they were forced to battle through wave after wave of Roar attacks.

The hosts had their backs to the wall for much of the closing stages after playmaker Marcelo Carrusca was dismissed for a second bookable offence in the 82nd minute.

“It was a bit of a scrappy goal that we gave away [on Jamie Maclaren’s equaliser].

“[Roar] probably controlled the game with the ball but after the week we’ve had we’re very happy with that three points.” 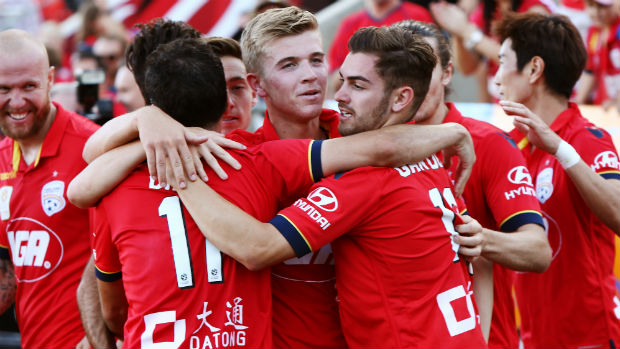 Regan, a mid-season signing following a stint in Malaysia, was immense alongside Dylan McGowan as the pair prevented Brisbane from going ahead.

More drama was still to come at the other end when Roar goalkeeper Michael Theo was shown a straight red card for elbowing McGowan deep into stoppage time, a decision which resulted in Cirio’s match-winning spot kick.

“Obviously there is going to be talk about it. I think it was pretty cruel for Brisbane,” Regan said.

“[But] we’ll take three points. Who are we to knock that back?”