The Reds laboured desperately in search of an equaliser after Juande scored an absolute screamer on the half-volley, but ultimately the Sky Blues advanced to the title decider.

Still, despite the immediate disappointment, upon further reflection it is a season that Adelaide can be proud of and excited about the future. Not least because the Club returned to the top six for the first time in two years, and recorded a maiden finals win on the road after beating Brisbane Roar, but the direction the Club is heading in.

Carl Veart guided Adelaide to a fifth place finish in his first full season at the helm, implemented an attacking brand of football and provided plenty of opportunities to the young players in the squad.

We analyse the season that was and highlight some of the main chapters.

After ending 2020 with a goalless draw away to Western United, Adelaide played its first home match in more than nine months to kick off 2021 by beating Melbourne City in front of more than 10,000 fans at Coopers Stadium. An inspired second-half performance saw Tomi Juric score his first goal for the Club since returning before Stefan Mauk doubled the lead.

But due to border restrictions, Adelaide had to wait more than two weeks to play its next match, losing any rhythm it had established, suffering a 5-3 defeat to Perth Glory. They then edged fierce rivals Melbourne Victory 1-0 courtesy of Mohamed Toure’s expert finish.

The Reds snapped a three-game skid, responding with the second longest winning streak in the Club’s history – six successive triumphs – to not only get its season back on track, but ultimately consolidate its place in the top six. In hindsight, that blistering run of form proved vital as United’s performances waned in the latter stages of the campaign. This stretch highlighted the Reds’ potential and what they are capable of at their best.

United’s improved form coincided with the arrival of Craig Goodwin on loan from Saudi Arabian side Al-Wehda as well as the addition of Joshua Cavallo, who was the revelation of the year. That belief was vindicated by the 21-year-old claiming the A-League Rising Star at the Alagich Vidmar Awards last week. 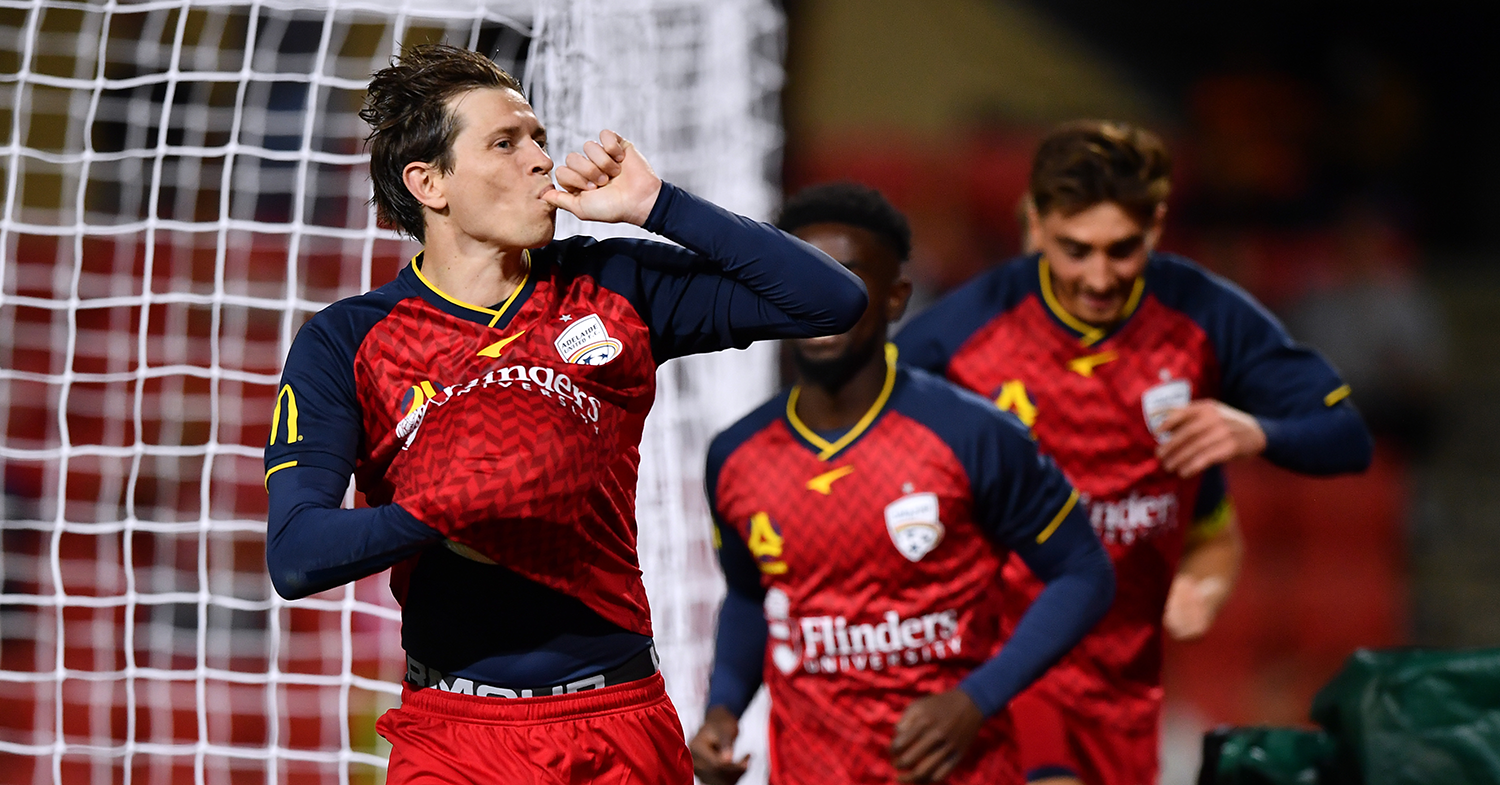 Juric’s hat-trick of penalties in a 3-2 win over Central Coast Mariners ignited the run which included road scalps over Western Sydney Wanderers, Melbourne Victory and Newcastle Jets, in addition to the gallant 1-0 home victory against Sydney FC.

Patchy run to end the season

The remaining 13 matches were a bit of a rollercoaster ride with games arriving thick and fast. The short turnarounds made it difficult to navigate at times, coupled with players sustaining injuries and really testing the depth of the squad. During this stretch Veart’s charges registered three wins, five draws and five setbacks. United never lost two matches in a row during this period but struggled to generate any momentum. Frustratingly, the Reds lost three matches from winning positions after scoring early in the second-half only to fall 2-1 on each occasion – against the Mariners, Wellington Phoenix and Perth. They also were held to 0-0 stalemates in back-to-back Friday night home games.

A common theme that continued to rear its head was the inability to capitalise on periods of dominance and convert chances at key moments into goals. Veart raised this issue throughout numerous press conferences, stating the stronger teams will almost always find a way to punish you, à la Sydney FC. There were some positives though. Adelaide swept Victory in a single season for just the second time since the A-League’s inception courtesy of a 1-0 win and brushed aside Brisbane Roar by the same scoreline a week earlier. In some respects, when it did appear the season may unravel, United managed to get timely results.  All in all they also boasted a pretty formidable record at Coopers Stadium, prevailing in seven of 13 home fixtures and losing just twice.

Adelaide secured its status in the top six on the final game of the regular season via a 2-2 draw with the Wanderers. The result meant United missed out on hosting a home final and forced to travel to the Sunshine state. Adelaide had never won a finals game outside of South Australia, while Brisbane had never lost a finals contest on home soil in their preceding 10 games.

But Adelaide would rewrite history, flipping the script and stunning the hosts after Juric’s expeditious brace propelled the Reds into a commanding 2-0 lead inside 20 minutes. The South Australians defended for their lives in the second-half and held on to advance to the Semi-final against the Sky Blues. Conceding two first-half goals against the defending champions was a mountain too big to climb, despite Juande offering a glimmer of hope with a thunderbolt of a strike after the interval. United’s season ended but no one could fault the effort of the players.

Adelaide has built a reputation of being a destination Club for young players to develop and get opportunities if they perform. Since adopting this philosophy, the Club has remained competitive and established a strong South Australian identity with Veart and several former players returning and assuming roles at the Club. Under his stewardship this season, Veart handed debuts to three local players, while the likes of Kusini Yengi, Mohamed Toure, Pacifique Niyongabire, Noah Smith and Yared Abetew saw increased playing time from the previous campaign.

That is without mentioning the other budding youngsters in James Delianov, George Timotheou, Louis D’Arrigo, Joe Caletti, Ryan Strain, Al Hassan Toure and Cavallo, who will only get better. Combine the aforementioned core group with the existing experience in the squad and the addition of some more quality and there is plenty of reason for optimism moving forward.

Thank you for your steadfast support and sharing the ride with us this year.

We go again next season!