Adelaide United’s 2017/18 Hyundai A-League season will begin with two tough away trips against the Wellington Phoenix and Brisbane Roar at Westpac Stadium and Suncorp Stadium respectively.

The Reds’ first home match of the season will take place in Round 3 against arch rivals Melbourne Victory at Adelaide Oval on Friday, 20 October.

That clash will be succeeded by another home encounter with Melbourne City at Coopers Stadium the following week.

Rounds 8 and 9 will pit Adelaide against New South Wales heavyweights Western Sydney Wanderers and Sydney FC – both at Coopers Stadium – followed by a Round 10 battle with the Victory at Etihad Stadium.

The 2017/18 campaign will also see the Reds play five matches in 20 days across the festive season, known as the Summer of Football period, commencing on Boxing Day in a home meeting with the Central Coast Mariners.

The regular season for United will conclude on Sunday, 15 April in an away fixture versus Western Sydney at ANZ Stadium.

All Hyundai A-League matches will be broadcasted live on Fox Sports, while select Saturday night games will be shown on Network 10’s sister channel One. 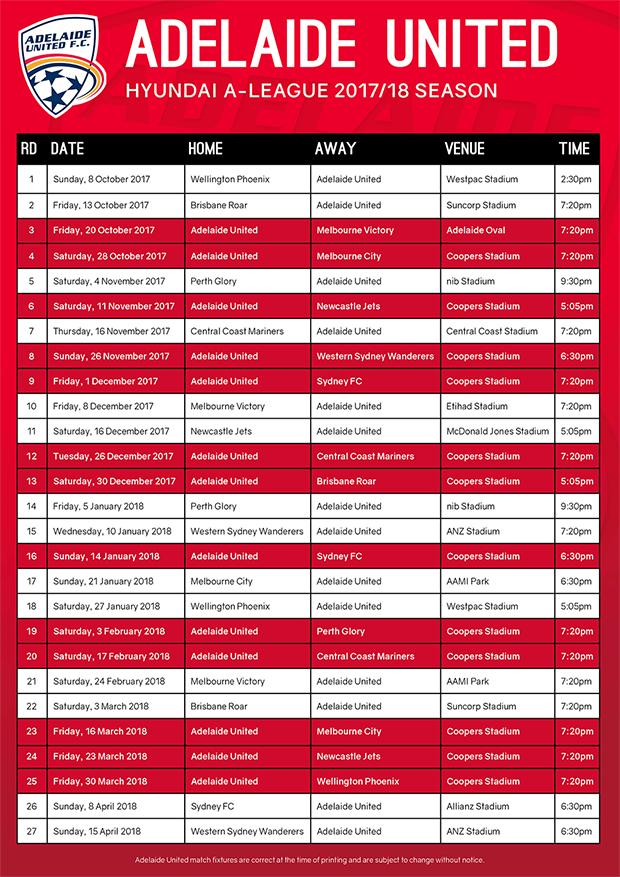