Adelaide United Women fell to a 2-0 defeat against Sydney FC Women in Round 4 of the Westfield W-League at Seymour Shaw Park on Sunday.

A goal to Remy Siemsen broke the deadlock before the interval, and despite attempts put forth by Sofia Huerta and Racheal Quigley, an involuntary own goal from the Reds sealed the win for the Sky Blues.

Adelaide United Women Head Coach, Huss Skenderovic, made several changes to his starting XI, with prominent goal scorer, Adriana Jones out, as well as Alex Chidiac unavailable. Young gun Grace Abbey and Isabella Scalzi were granted starts, and Quigley made a return to Adelaide United after three seasons, while Georgia Iannella made her debut.

Despite the solid defence of the Reds’ Women, and potential danger on the counter-attack, Sydney FC Women dictated the flow of the match in the first period and imposed a continuous threat towards Adelaide United ‘keeper, Eliza Campbell’s goal. 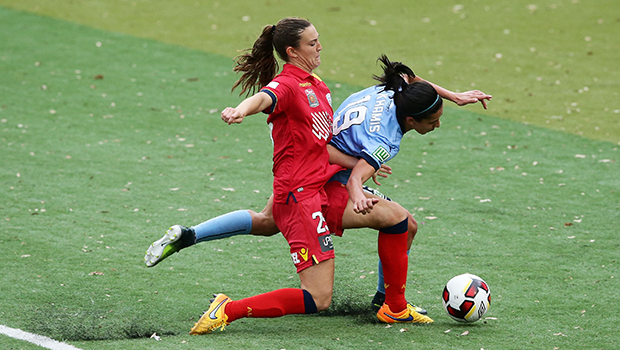 Caitlin Foord of the Sky Blues controlled the early minutes, with an emphatic chance from distance that sailed wide of the post, and came near to assisting Leena Khamis in the area, but her shot was also sent wide.

Huerta persisted on the dangerous play caused by United, and flashed a venomous strike across goal, but no other Red shirts were there to meet the ball. Nicola Bolger was released by Olivia Price, but another shot from distance was sent off target. Foord then ventured toward another attempt, a half-chance was cleared out by the Reds’ defensive line.

The Harbour City hosts were rewarded for their dominance in the first 45 minutes courtesy of Siemsen who was able to find an inch of space to float her shot coolly over Campbell on the 42 minute mark and put her side ahead.

The second half closely mirrored the actions of the first half, but Skenderovic’s side burst out of the blocks and sharpened up their play as they fought for every ball in a search high and wide for an equaliser.

Huerta accelerated onto the ball from a corner that followed in a blistering shot over the bar. Huerta then continued to advance on many runs, true to her characteristics, but was thwarted by Sydney defender, Elizabeth Ralston when Huerta looked promising. 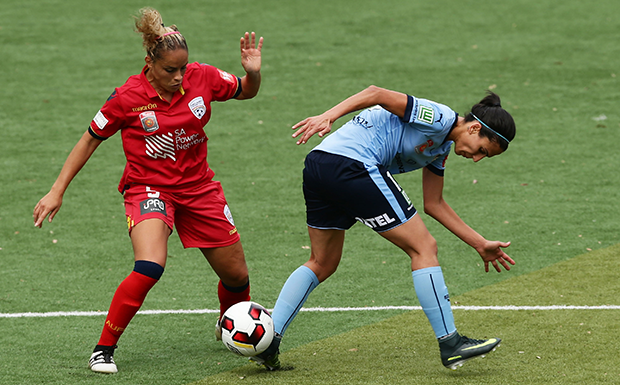 Minutes after the hour mark, Siemsen embarked upon completing her brace, but was unable to scramble the ball from under her feet. As play endured, an Adelaide United equaliser looked clear, but were stopped by the home side, in spite of losing their one goal lead.

In the 66th minute, Quigley’s attempted cross from the byline smashed the woodwork to shake up the defence of Sydney FC. Campbell palmed away an Alanna Kennedy header that looked to double the lead, but it was an own goal bundled into the back of the net from a Sydney corner that forced the goal after a goalmouth scramble, six minutes before full-time.