Adelaide United can officially confirm Bruce Djite has left the Club for South Korea’s Suwon FC in the K-League, after successfully completing a medical at 3.30pm local time (4.00pm ACST).

After Suwon activated Djite’s buy-out clause, the Club duly complied with the transfer.

Djite, the Club’s all-time leading goal scorer with 44 goals in all competitions, made a total of 165 appearances for the Reds over two spells in South Australia.

The striker was pivotal in the Club being able to clinch the Hyundai A-League Premiers’ Plate and Championship trophy in 2015/16, scoring 11 goals and claiming United’s Golden Boot last season. 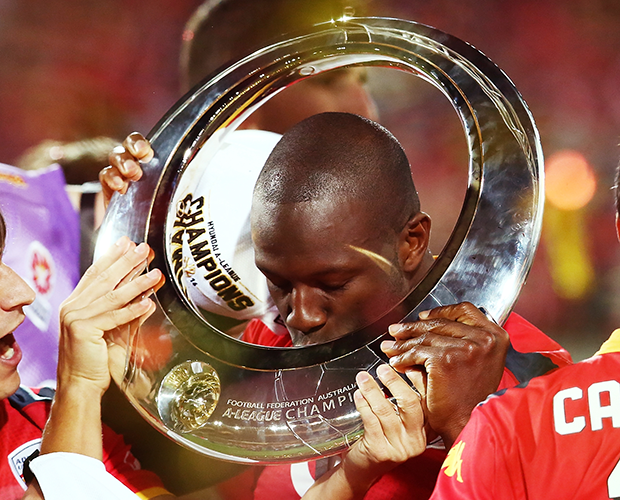 Speaking on Djite’s departure, Adelaide United Chief Executive Officer, Grant Mayer, said: “It is disappointing to lose such a well-rounded individual like Bruce and his absence will be felt both on and off the football pitch.

“But we won’t stand in the way of another one of our boys being able to head overseas and realise a dream, so we’re delighted for Bruce.

“Unfortunately, this is the world of football, and the success that we experienced last season was always going to have overseas clubs chasing our players.

“Our coaching staff have done a fantastic job in bringing through young talent such as Ryan Kitto, Marc Marino, Ben Garuccio, and Jesse Makarounas.

“Our primary focus is clearly on established local and/or overseas players and, as always, our members, sponsors, and fans will be kept informed along the way.

“With the transfer window closing in the coming weeks, I can assure everyone that we have our eyes firmly on overseas markets.

“On behalf of everyone involved with the Club, I want to thank Bruce for his outstanding service and wish him well in his future.”

The entire Adelaide United family thanks Bruce for his commitment to the Club and wish him well for his future career.