Adelaide United Youth Head Coach, Huss Skenderovic insists that the Club is confident on ending the season positively, despite not making the Foxtel National Youth League Grand Final, in the last round against Perth Glory at Ashfield Sports Club on Sunday.

Following a defeat to Melbourne Victory and a draw with second-placed Brisbane Roar, Adelaide United Youth currently sit in third on the Conference A ladder, with a game left.

In the last fixture between the two sides, the South Australians triumphed over their opponents in a dominant 3-1 display, courtesy of a Josh Mori Strike, and a brace from Ryan Strain in Round 4 at Elite Systems Football Centre.

Last weekend, the Young Reds looked to have grasped a crucial three points against the Roar, thanks to an audacious lob by Marc Marino, and an own goal, but surrendered their advantage, suffering two goals late into the second-half, to settle for a share of the spoils in a 2-2 draw.

Meanwhile, Perth Glory sit fourth with one point separating them with Adelaide, following a 0-1 loss to Conference leaders, Melbourne City.

Young Reds Boss, Skenderovic admits that the draw against Brisbane Roar was a disappointment, as it could have proved crucial in seeing the South Australians head to Gosford for the Grand Final, but remains optimistic for the future. 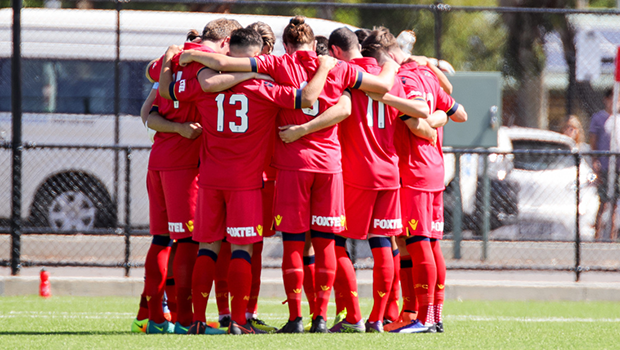 “It was definitely disappointing to come away with only a draw last weekend against Brisbane Roar, as we did have a solid 2-0 lead at halftime,” Skenderovic said. “We played really well and dominated the first half, but then it was Brisbane in the second.

“It was unfortunate to concede with seconds left of the match, but we didn’t play for 90 minutes, which is expected in youth football.

“This will definitely be a lesson in teaching them that they need to play for 90 minutes, and not switch off, as they saw first-hand of what can happen if they don’t.

“It will also help them a lot with their growth and development as footballers, but in saying that, we did have a great season and played really well, and there are many positives.

“We are definitely in the top four teams of youth league, which we have proved over our campaign and the way we played, so we remain confident.”

Ahead of their final match of the season against Perth Glory, Skenderovic believes it is a chance to end it on a high, and move forward.

“We are confident ahead of our clash against Perth Glory, as we know what we are capable of and if we play our best football we can finish off the season confidently.”