Ersan Gülüm admits it was a difficult first hit-out after making his unofficial Adelaide United debut in a 1-1 draw with Campbelltown City on Wednesday night.

Baba Diawara restored parity for the Reds during the second-half at Steve Woodcock Sports Centre.

The ex-Beşiktaş defender played around 70 minutes in his first outing in Red since joining the Club last month.

However, Gülüm insisted he was not at his best despite a solid display at left centre-back.

“And it was a bit difficult for myself and I thought I’d be a bit better than what I was.

“But I mean that’s the first pre-season game so I’ve been training with the team for one week now… But I can only get better from here.”

Gülüm, who has seven caps for Turkey, said the slippery playing surface only compounded the team’s frustrating performance.

“Even though you wear studs on this ground it was very muddy underneath,” he explained.

“Obviously we’re a team that likes to pass the ball around a lot but we couldn’t do that at times.

“It was a bumpy ground and we couldn’t take a first touch and one touch passing was difficult.

“But the main aim was to get fitness under the belt.” 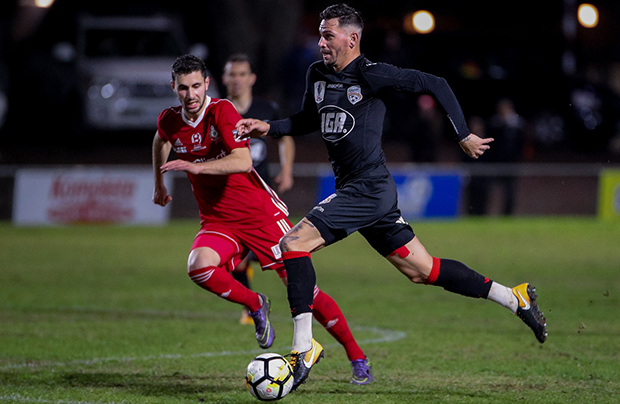 The 30-year-old went on to say the team is on the right track and looking forward to facing fierce rival Melbourne Victory in the Westfield 2017 FFA Cup round of 16 at Marden next week.

“It’s always good to play against them,” he said.

“The team is looking good and very fit.

“And what the coach wants us to do on the park, the boys are doing and I think that’s what Marco wants us to be doing which is good.

“Overall I think the team is on the right track because until the season starts there’s still less than two months to go, so I mean we’re only heading in the right direction.”

Gülüm was also confident fans will attend in big numbers against the Victory.

“I mean everyone likes a good rivalry match and I think our supporters will be there on the night and supporting us,” he said.

“Because at the Newcastle game they were there supporting us and we got the result they wanted.

“And I think if they come out and support us on Wednesday night we’ll get the job done for them as well.”

Adelaide United host Melbourne Victory in the Round of 16 of the 2017 Westfield FFA Cup on Wednesday, 23 August at Marden Sports Complex. Kick-off is at 7.00pm ACST.