Holland announces his hunger for success

James Holland has declared his intentions for the upcoming Hyundai A-League 2016/17 season, after being unveiled as Adelaide United’s new signing on Wednesday afternoon.

The Reds announced the capture of Australian midfielder, James Holland, on Wednesday afternoon, 18 days out from their first Hyundai A-League fixture of 2016/17.

Holland, who has spent the last seven years in Europe, returns to Australia after beginning his career with fellow Hyundai A-League club, Newcastle Jets, in 2007.

Having touched down in Adelaide overnight, Holland said he’s come to the Reds to achieve even more success than what he’s already experienced in his career, with one Hyundai A-League Championship and an Austrian Football Bundesliga Championship with Austria Wien under his belt already. 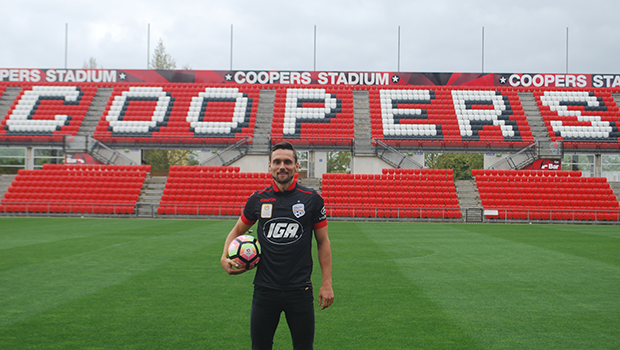 “I want to win and I want to succeed,” Holland said. “Any player that steps out onto the field is wanting to win with their team and that’s my goal here.

“I want to experience some success with the team and hopefully I can improve as a footballer as well.”

Discussing his decision to join the Reds, Holland said it was made easier after speaking to friend and current United player, Tarek Elrich.

He explained how Elrich spoke so highly of the Club’s environment and football philosophy, something Holland believes can improve his own football.

“I’ve got some friends here that I’ve spoken to, Tarek Elrich being one of them, and he spoke very highly of the Club and of Guillermo Amor.

“(Tarek spoke) about the environment and the coaches and it seems like an environment that can push me every day and make me a better footballer.

“I wouldn’t be here if I wasn’t positive about the state of the team… (and) I definitely think we can compete in the league, 100 per cent.

“Seeing the success that Adelaide has had in the last few years and also the players that have been produced through the Club, especially in my position that have kicked-on to do bigger and better things, that was all a big influence (in signing with Adelaide) too.”

Asked about his fitness ahead of the new campaign, having not completed a full pre-season, Holland was confident that he’s kept himself in good enough condition to slot into the Reds’ training sessions.

“I’ve been training hard and my level is good, but I need a bit of the football side of things to improve my sharpness and hopefully that comes quickly.

“But once I get out on the pitch I’ll be able to feel where I’m at, and work with the coaches to be properly fit very soon.

“I consider myself a team player, so hopefully I can bring some more experience into the team and help us in some way.”

You can meet James at Adelaide United’s 2016/17 Home Jersey Launch on Saturday between 12pm and 4pm at the AUFC Store (corner Manton St and Holden St, Hindmarsh).