Adelaide United debutant, James Holland, says it’s going to take time for the new-look Champions to click after they were held to a 1-1 draw by Newcastle Jets on Sunday.

Only five of the Reds side that started in the Grand Final were in the starting XI in the Hunter and they were forced to settle for a point after Jesse Makarounas’ goal cancelled out Wayne Brown’s opener.

Holland is one of the new faces in the Adelaide side and put in a strong shift, including a vital last-ditch tackle on Andrew Hoole to deny the home side a winner 17 minutes from the end.

Asked how long it will take for the Reds to hit their straps, Holland told Fox Sports: “It is going to take time. 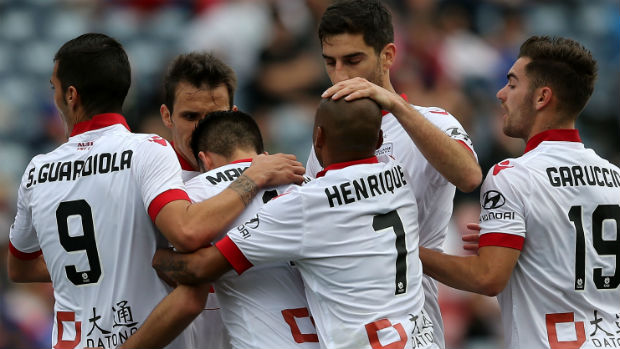 “I have to get used to working with [Isaias] in the midfield and also Sergi [Guardiola] up front.

“He makes very good runs and we just have to get used to him. When to play him, when he comes short, we he goes long.

Holland, who last played in the Hyundai A-League with the Jets seven years ago, says it’s been an easy transition into Adelaide after joining the club last month from German outfit MSV Duisburg.

And he’s noticed a vast improvement in the standard of the competition since he last played in 2009.

“The tempo is a lot higher and the league has become a lot more professional as well,” the 27-year-old midfielder said.

“Today’s game for me personally was difficult and it’s [the competition] definitely improved since last time I was here.

“But it’s been an easy transition for me. It’s a good group, it’s very warm, the change-room is easy to fit into and the boys have been fantastic with me,” Holland added.

The Reds will play their first home match of the new season on Friday night, with Western Sydney Wanderers heading to Coopers Stadium in a replay of last season’s Grand Final.

To purchase tickets for the Reds’ first home match of the season, click here.