A Sofia Huerta brace earned Adelaide United Women a share of the points in a hard-fought 2-2 draw with Canberra United in Round 11 of the Westfield W-League at McKellar Park on Saturday.

To fit with a dominating individual performance, Sofia Huerta levelled the score-line twice with a tremendous brace, to cancel out the two goals from Canberra United’s Ashleigh Sykes, recording a third draw in a row for the Reds Women.

In a thrilling encounter, Huerta opened the proceedings by charging forward early with no fear, striking towards goal, but Canberra defender, Hannah Brewer was in prime position to block the oncoming shot. Huerta fired for a second time, to eventuate in the hands of Canberra shot-stopper, Trudy Burke.

The Canberra outfit took hold of the power for the greater number of the first 45 minutes, with the hosts Captain, Sykes proving an initial threat, with two goals ruled offside. Desperate to give her side an early lead, Sykes finished again in the 20th minute, shortly after her second goal attempt, ensued by the combination with Grace Maher.

Adelaide were forced into a tantalising battle, with Sykes venturing on the attack in several opportunities. Huerta experimented to overthrow Canberra’s attack and start her own, but was denied a chance, due to the offside flag. 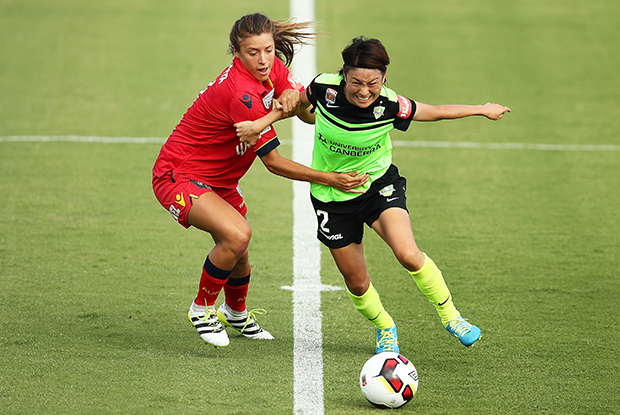 A promising chance for the visitors arose before half-time, as Captain, Stella Rigon fed a lovely ball through to Alex Chidiac, whose first touch was unfortunately too heavy, which kept them a goal down at the break.

Canberra picked up their pace in the second period, flying more chances into Willacy. But Adelaide grasped onto their never give in attitude, with Adriana Jones having one of the best opportunities to equalise, her shot swiftly brushed past Emma Checker, and skimmed the left upright.

Adelaide United were awarded with a chance at the spot, just over the hour mark, as Huerta was brought down by Jenna McCormick in the area. Converted expertly, Huerta scored her first to spark the fight-back.

The likes of Chidiac, Lucy Adamopoulos and Racheal Quigley provided Huerta with a golden chance, but her shot was off target. In the 79th minute, Canberra regained the lead through Sykes, a distanced shot finding its way past Willacy.

Canberra’s lead lasting only momentarily, Huerta answered back forcefully to smash the ball into the back of the net following a sensational run. Both sides fought to the end to prevail over the other, despite Canberra having the most chances in the latter moments, Adelaide remained resolute to take a point home.