Isaias satisfied with away point

Influential Adelaide United midfielder Isaias says the Reds can be content with Saturday night’s draw away to Sydney FC despite falling short of a drought-breaking victory.

The 0-0 draw means the reigning champions are yet to win in eight matches, though they did secure their first clean sheet of the season against the competition’s pace-setters.

With Sydney having netted 18 times across the first seven rounds, Adelaide’s Grand Final goalscorer viewed the stalemate as positive sign of progression.

“We came here to get three points but on this field it’s very difficult to get something,” Isaias told Fox Sports.

“(Sydney) are flying at the moment, they are first on the table so I think we played a good game.

“We’re happy with a point.” 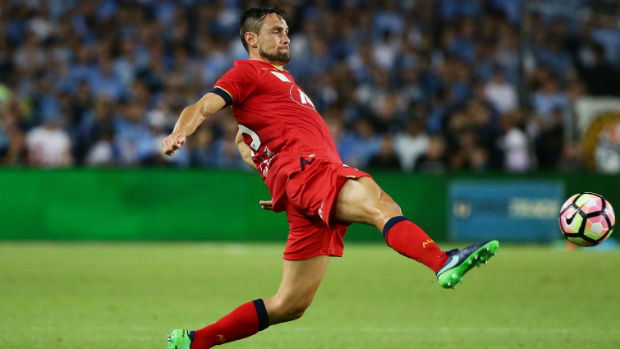 United midfielders Marcelo Carrusca and James Holland both found themselves in position for a second-half winner but guided their shots straight at Sydney goalkeeper Danny Vukovic.

Isaias believes results will turn soon if his side continues to create those kinds of clear-cut chances.

“Football is sometimes like that, the ball doesn’t go in,” the Spaniard said.

“But I think we played a good game. We have to keep going. If we play in this way we will get (the) wins.”