Adelaide United suffered a 2-1 defeat to the Western Sydney Wanderers at Coopers Stadium on Friday, a Brendon Santalab double cancelling out Henrique’s opener for the Reds.

Henrique’s opener, in the 43rd minute, ensured the Reds would head into the dressing room holding a slender advantage, however a second-half brace from Brendon Santalab overturned the deficit.

Reds Head Coach, Guillermo Amor, named an unchanged line-up for the clash against the Wanderers, hoping to establish some continuity within the squad.

In what was the Grand Final rematch from the 2015/16 season, the Wanderers were desperate to avenge their 3-1 loss in last years’ title decider with both sides equally up for the challenge.

And the visitors could perhaps have been guilty of being overzealous early on. Jack Clisby was brandished a yellow card for clattering into Sergio Cirio after two minutes – forcing him off the field moments later.

However, other than that incident, it was an extremely cagey affair as there were no chances to speak of in the opening 20 minutes.

As the clash ebbed and flowed, the hosts began to grab a stranglehold on proceedings – making several incursions into Western Sydney’s 18-yard box. Winger Ryan Kitto appeared most threatening for the hosts when receiving the ball in wide areas, as he isolated his opponent, Clisby, in one-on-one situations.

Kitto delivered numerous balls into good attacking positions with his first incisive cross finding Henrique, though the latter was unable to direct his effort on target. Nevertheless, this passage of play would foreshadow what was to ensue just before the interval.

But before Henrique and Kitto would combine for the goal, a swift counter-attack initiated from the back culminated in Jesse Makarounas seeing his effort hit the side netting.

Although, Reds fans did not have to wait much longer to draw first blood, as Adelaide deservedly took the lead two minutes before the break through forward Henrique. The 31-year-old, nicknamed ‘The Slippery Fish’, received the ball with his back to goal from Kitto’s low cut-back, before turning to fire home from close range. 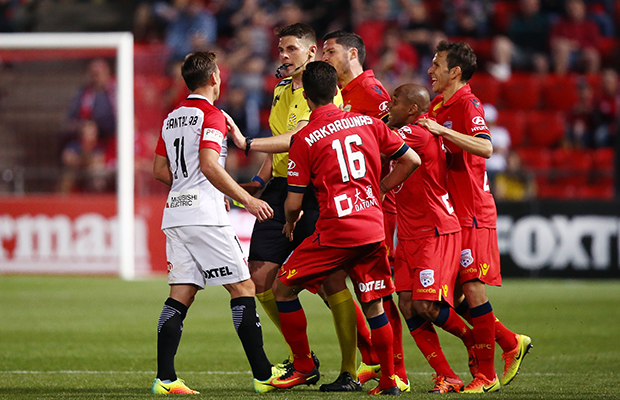 The second-half saw Adelaide pick up where they left off at the end of the first period, playing with real intensity and dominating the initial exchanges.

Striker Sergi Guardiola as well as James Holland were busy throughout the encounter, involved in almost all of United’s forward play, despite unable to get on the scoresheet. However, the Reds would live to rue their missed opportunities, courtesy of Santalab netting against the run of play from close range on 66 minutes.

The setback only seemed to motivate Amor’s men, who pressed on in search of the winner. A deft back heel from Guardiola invited the chance for Holland shoot, however gloveman Andrew Redmayne was alert and parried the ball away to safety.

Six minutes before full time, Santalab was fortunate to remain on the pitch after an impetuous tackle on Holland caught the ire of the home supporters.

Yet it was not to be for Adelaide, as Santalab would deal the hammer blow in the 91st minute, connecting again with Nichols’ cut-back to steal all three points.

Following the match, Reds boss Amor admitted it was frustrating his team could not capitalise on their dominance, prior to Western Sydney restoring parity through Santalab.

“In the second-half at 1-0 we had control of the game… and after this they score one chance and after that it’s 1-1, the game was too much open and for them (the Wanderers) it’s good,” Amor said.

In spite of the defeat, Amor was also pleased with a number of the new players at how quickly they are adjusting to their new environment.

“I think Sergi (Guardiola) played very well, it’s important for the team and (Ryan) Kitto played well his game was good and the same with Henrique, he played well,” Amor continued.

“In general I think the game was a strong game with Western (Sydney) it’s always a strong game, it’s hard, it’s a physical game.”