Adelaide United is delighted to announce German Marco Kurz will be Head Coach for the next two years.

Kurz brings a wealth of knowledge and experience to the Hyundai A-League having played and coached at the highest level in the German Bundesliga.

The 48-year-old made 299 Bundesliga appearances as a player with VfB Stuttgart, FC Nurnberg, Borussia Dortmund, Schalke 04 and 1860 Munich.

His most successful coaching spell came in charge of FC Kaiserslautern, first guiding them to promotion to the top-flight, and then finishing seventh in the 2010/11 Bundesliga season.

Securing a Head Coach was the Club’s number one priority this off-season and Kurz will now have input into finalising the squad for the Hyundai A-League 2017/18 season.

AUFC Head of Football Operations, Ante Kovacevic said Marco was a standout candidate in a very experienced field of applicants.

“It has been a very thorough process and one that has included an exhaustive review of the current playing squad and off contract A League players.

“We have also had in depth discussions regarding Visa players and his expectations of the entire playing group.

Speaking from Munich, Kurz said he was impressed by the Club setup and the city of Adelaide.

“Grant Mayer and Ante Kovacevic always left me under the impression that I would be the right person for the job as a head coach in Adelaide. I was impressed by their effort to convince me.

“After valuable conversations with Ante I’m looking forward to taking on this new and exciting challenge.

“I’ve done a lot of research already about the A- League and I’m very proud to become a part of it.”

Kurz will arrive in Adelaide ahead of the Clubs first training session on Wednesday 28 June. 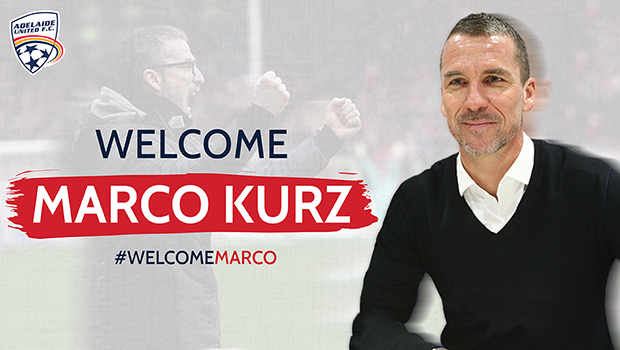