Mauk reflects on time with Socceroos

After being selected by Ange Postecoglou to be part of the 23-man Socceroos squad to face England, Stefan Mauk has returned to Adelaide ready to get stuck into Adelaide United’s pre-season.

Despite not featuring against the Three Lions at Sunderland’s the Stadium of Light last Saturday, Stefan Mauk says he’s brimming with confidence and self-belief following his maiden Socceroos call-up.

“It was an unbelievable experience,” Mauk exclusively told adelaideunited.com.au. “Being my first time in the set-up, I was a little bit nervous going in, but the boys are extremely welcoming and all the staff made me feel part of it.

“Coming off the back of having a few weeks off and training by myself caused me to take maybe ten or fifteen minutes to get back into it when we had our first session, but after that I think I was doing quite well.

“It was a great learning experience for me to see what level the national team is at and where my football has to be to get there on a consistent basis.”

The skilful attacking midfielder set the Hyundai A-League alight with a string of outstanding performances for the Reds following his mid-season move to Coopers Stadium. 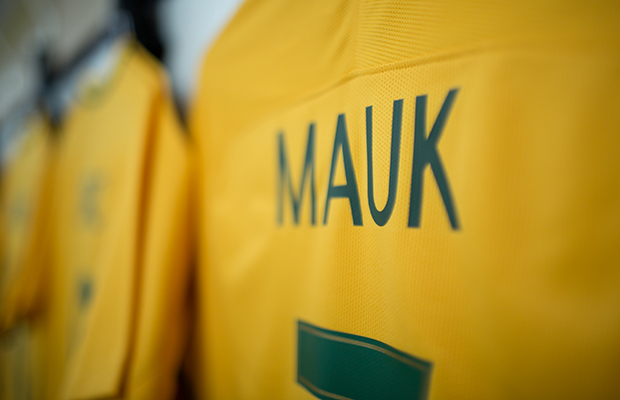 And perhaps in part due to United’s incredible finish to the season and the impressive football he and his teammates were playing, Mauk said he wasn’t startled by the level of Ange Postecoglou’s training sessions.

“The level of training didn’t surprise me at all, but the standard was very, very high.

“That’s what the boss (Postecoglou) wants and being a national team, it was the standard that I expected it to be.”

The 20-year-old also spoke of how Postecoglou encouraged his players, saying the belief he has in his side will push Mauk throughout season 2016/17 as he aims to secure another spot in the Socceroos camp.

“The main message from Ange from my time in Newcastle was to just believe in yourself.

“We were coming up against England, but he said that while they had great players playing at big clubs we were just as good.

“Now I have to implement the belief he has in all of us and keep working hard so that my football develops even more.

“I’ve realised just how successful we were last season here in the A-League and now I want to replicate that on a personal level but also as a team again.

“Having the chance to be with the Soceroos means I want to be in that environment all the time so my goal is to get back into pre-season and work as hard as possible to make sure I’m always getting the opportunity to be selected.”