When did you start supporting AUFC? Why?
I have always supported our local South Australian sporting teams and have supported AUFC since 2010. I now share my AUFC passion with my son who lived in Melbourne for nine years and have bonded further with him in attending the games together these last two years since his move home to Adelaide.

What made you fall in love with the club and what made you become a member?
AUFC has always excited me with their amazing players, family spirit, and ability to really unite and accomplish any goals, especially in 2015/16. I have always followed AFL and football, however, due to financial reasons, my memberships were restricted to AFL only. Watching our boys turn eight games without a win into a united and strong team taking out the Premiers’ Plate and then becoming Champions increased my passion and preference for football over AFL and I was therefore determined to become an official member.

How long have you been a member of AUFC?
2016/17 is my first AUFC membership.

Why did you choose the Captain Club Membership as an add-on to your other membership?
My son purchased our memberships for us and he wanted to provide us with as many benefits as possible. 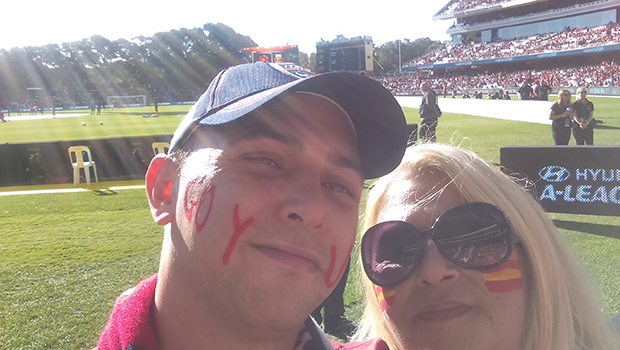 What is your favourite memory from a Reds match? Why?
Being at the 2015/16 Grand Final with my son, Robby, who is a converted Melbourne Victory supporter, and sharing the excitement, pride, and unity between other Adelaide United supporters is my favourite memory. When we scored the final goal, we weren’t a crowd of strangers, we were a united family sharing in the joy and pride of our team being Champions. This was all followed by a train journey home with plenty of United cheers resonating throughout the train enhancing our pride.

If you could say anything to a Reds fan who is thinking of becoming a member, but hasn’t yet, what would you say?
Becoming a member will guarantee you the chance to watch and support AUFC and be provided with many exciting memories, whilst building friendships with our supporters. 2016/17 will bring amazing highlights from a club that has truly found their unity and you don’t want to miss out.