Powell: We can take it to another level

Tiarn Powell has said the Adelaide United Women’s team have the opportunity to take their football to the next level through their recent merger with Adelaide United’s men.

Last week it was announced that Adelaide United would be regaining management of the W-League team from Football Federation South Australia, who had previously managed the squad since 2011.

Forward, Tiarn Powell, welcomed the announcement, saying the move will be largely beneficial not just for her and her teammates in developing their football, but also for the game more generally in South Australia.

“This is a positive step for football and for Adelaide to be doing together,” Powell said. “With the men doing so well last season, hopefully now that we’re all part of one group we can produce some more good players and have the opportunity to raise our level.

“The coaching and medical staff will be very beneficial for us in the long-term and it’s a really exciting time because it can also help to boost Adelaide’s local football in general.” 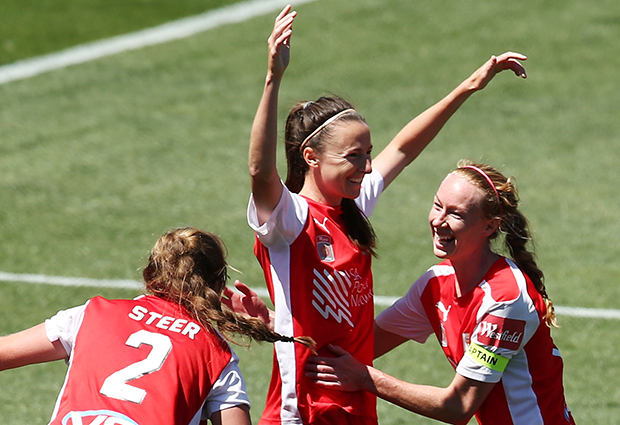 Powell, 25, also highlighted how the notoriety of the women’s squad now being directly associated with Adelaide United can increase the attraction of playing in the Westfield W-League for the many talented young women playing locally.

“I believe this will impact our team in a very good way and, like I said, hopefully it brings out more and more players to our attention so we can go to the next stage with our football.

“There are a lot of girls playing across the state that are probably good enough for the W-League and I can see this giving these footballers extra motivation to improve and push for a place in our squad.”

And with Finals football still the main objective for Powell and her teammates, she believes this “boost” can finally see the women make the illusive step into the competition’s top four.

“We’ve been so close to making the Finals in the last few years, especially if you look at last season.

“We’re close to reaching a new standard and this could be all that was missing from previous seasons when we’ve performed well, but have just fallen short at the final hurdles.

“This is the type of boost that we’ve needed to make the jump into becoming a top four side and from there we will see what we can achieve.”