Adelaide United suffered a heartbreaking 2-1 loss against the Newcastle Jets in Round 11 of the Hyundai A-League 2016/17 season at McDonald Jones Stadium on Friday.

A fortuitous Isaias free-kick had cancelled out Andrew Nabbout’s first-half opener, but Morten Nordstrand compounded United’s misery with a goal in the dying stages of stoppage time.

Reds Head Coach, Guillermo Amor made two changes to his starting XI, welcoming Spanish duo Isaias and Sergio Cirio back into the line-up at the expense of Jesse Makarounas and Nikola Mileusnic.

Adelaide arguably started the brighter of the two sides and were unfortunate not to have drawn first blood. Cirio, who made his first start since Round 2, completed an early incursion into the Jets’ box and saw his effort saved on to the upright by gloveman Jack Duncan.

The opening 15 minutes was an end-to-end affair with both sides throwing caution to the wind, pushing numbers forward in an attempt to take the lead.

Clut had a glorious chance to make it 1-0, but blazed his shot miles over the crossbar and he was nearly made to rue that missed opportunity as Iacopo La Rocca smacked the post from a corner. 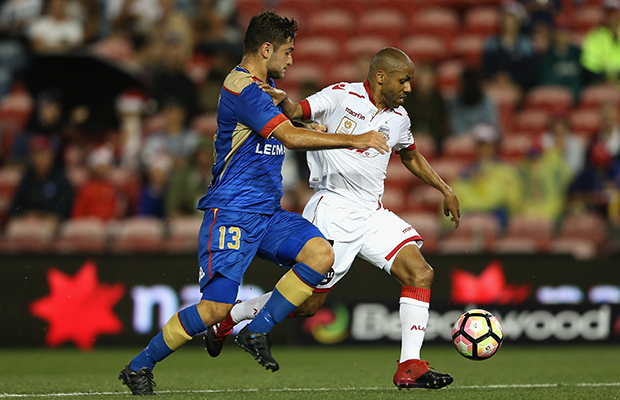 However, it was Adelaide who were left to lament their misfortune in front of goal. The Jets broke the deadlock on 29 minutes after Clut was played in through on goal, before squaring the ball to Nabbout who nonchalantly slotted his shot past Eugene Galekovic and the sliding James Holland.

The Reds continued to dominate the possession statistics, but were largely unable to muster any genuine sightings at goal. Marcelo Carrusca was heavily involved in the South Australian’s play as was Isaias, with the Spaniard ultimately restoring parity.

After Henrique was fouled on the edge of the 18-yard-box, Isaias struck the ensuing free-kick straight at Duncan which proved too hot to handle as the goalkeeper opted to punch rather than catch the ball.

Adelaide’s search for an elusive winner proved fruitless, despite dominating the second stanza for lengthy periods.

The clash again opened up in final minutes with Newcastle eventually taking full advantage. Galekovic initially came to the rescue to spectacularly deny Wayne Brown from close range, while Andrew Hoole hit the outside of the post in the 93rd minute.

But it was third time lucky for the Jets when substitute Nordstrand netted the winner with a clinical finish, in spite of replays suggesting the Danish striker received the ball in an offside position. 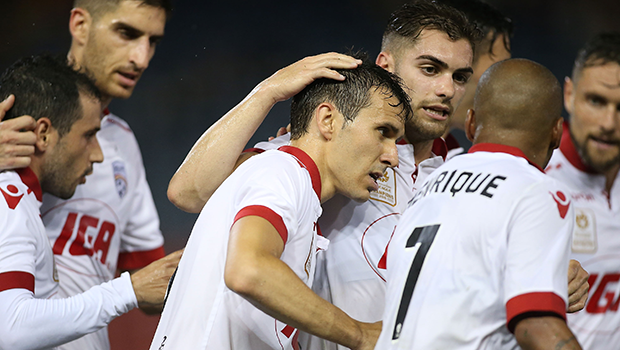 Following the match, Reds Boss Amor, bemoaned his team’s inability to take their early chances, though insisted he is optimistic Adelaide can turn their stuttering season around.

“It’s important in professional football to score goals, we played well I think in the first and second-half,” Amor said.

“Imagine if we had of scored (from Cirio’s and La Rocca’s opportunities), the result is 2-0 and the situation is different for us.

“But after we conceded the first goal the situation was different.

“I’m remaining positive though because the players are very good, we played well, sure we lost it’s true, but we deserved to win.”