The Adelaide United senior team were treated to a private tour of HMAS Adelaide on Thursday afternoon, after the ship arrived for its first visit of its namesake city a day prior.

The tightest-knit ‘family’ in the Hyundai A-League were treated to an exclusive private tour of HMAS Adelaide on Thursday afternoon, the home to many servicemen and servicewomen who’ve dedicated their lives to protecting our country.

The tour essentially resulted in the meeting of two families, with those serving their nation on-board likening themselves to one large family considering the extensive periods of time spent on duty. 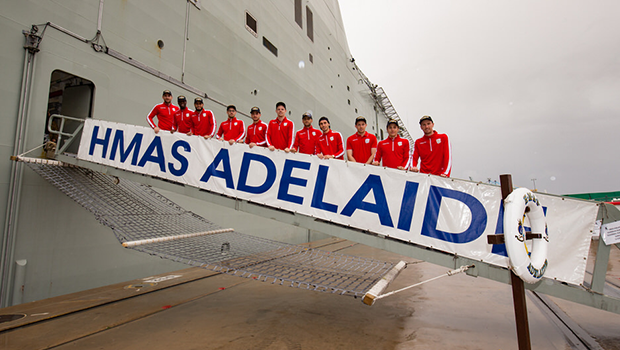 HMAS Adelaide itself is part of the Royal Australian Navy’s largest contingent of Amphibious Assault Ships, or Landing Helicopter Docks, with the Reds granted access to many of the most crucial aspects to its operation.

United Captain, Eugene Galekovic, thanked Captain Mandziy and his crew for their service before presenting him with a personal Adelaide United Champions scarf and signed football.

“The work and dedication of Captain Mandziy and the men and women on-board HMAS Adelaide is incredible,” Galekovic said. “They help to make sure our country stays safe and do a fantastic job at it.

“For our boys to be given the opportunity to see the inner-workings of the ship is a real privilege for us and we’re proud to be part of their first trip to Adelaide. 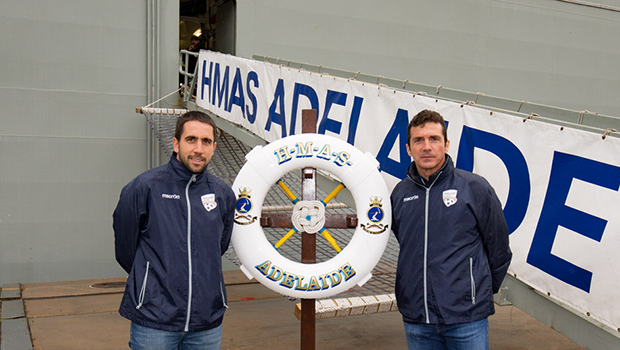 “Speaking to some of the people on-board there are some fans of the Club here so it’s been great to chat with, but also to get an understanding of what kind of sacrifice they’ve all made.”

The tour was also the perfect precursor for the Reds’ Round 6 match against Brisbane Roar at Coopers Stadium, which will be played on Remembrance Day. The match is set to be an absolute blockbuster, with the teams battling it out on Friday night football.