After the launch of the United Clubs Program, Sturt Lions Football Club was the first club to register members as part of Adelaide United.

Founded in 2003, Sturt Lions currently has more than 400 players associated with the club, with over 30 teams across all age groups and competitions, while its senior team currently plays in South Australia’s National Premier League State League.

Sturt’s first Adelaide United-associated members since the launch of the United Clubs Program were the Childs family, with Joel, 12, currently playing for the Lions.

“This is my first season playing for Sturt Lions and before this I was just playing for my school,” Joel said.

“I really like Sturt Lions because everyone is really nice and friendly and the coaches coach us well.

“I’m learning more playing here and my coaches are teaching me more skills which is great fun.”

Joel and his family are obviously United supporters too, and although they were only able to make it to a handful of games last season, they did manage to make it to the Grand Final.

“I’m definitely an Adelaide United supporter and I really like that they’re our local team and that I can go to all their matches.

“Last season I went to five games, including the Grand Final at Adelaide Oval.

“We become members this season so we can go to more games without a hassle.” 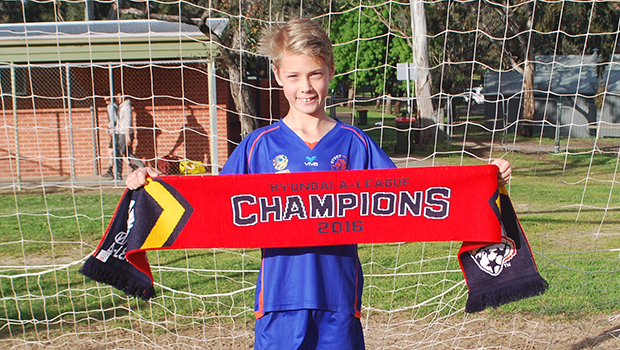 Joel’s mother, Diane, said the added incentive the United Clubs Program provides young footballers and their families in being able to support their local clubs was another great reason to join the Reds family for 2016/17.

“The United Clubs Program is great and it was another reason why we signed up as members,” Diane said.

“When we saw the email from Sturt Lions about the program it made a lot of sense and now we can give back to club.

“We bought the memberships for Father’s Day, for Joel’s dad and granddad, but it’s a family thing with Joel able to go and his sister, Ella, too.

“It’s so great because it doesn’t matter whose name is on the membership because if someone can’t go, I can go instead, which is perfect.”

The Childs family also has a rich history associated with football, Diane saying how Joel’s grandfather and father both played when they were younger.

“We have three generations of fans going to the games together and they’ve all played football too.

“Joel’s granddad is from Watford in England and played there for a while before moving to Australia.

“Then Joel’s dad was playing for a bit too, but now Joel is playing too, which is great.”

To support our club, and providing they have registered for the United Clubs Program, you just need to follow the following steps when you sign up for Adelaide United membership:
1. Visit GOREDS.com.au
2. Select your membership type
3. When you arrive on the “New Registration” page, insert your club’s name under ‘Other Information – Associated Grassroots Club’
4. Complete the registration process and pay for your membership