Adelaide United Youth suffered a 3-2 loss to Brisbane Roar in Round 5 of the Foxtel National Youth League at A.J. Kelly Park on Saturday.

In a tantalising contest for the Young Reds in the Sunshine State, the visitors remained lionhearted to fight back against a strong Brisbane Roar side.

A brilliant brace from Ben Warland in the second half was unfortunately cancelled out by a dominant first half display from the hosts, with a Nick D’Agostino double and a neat finish by Joey Katebian.

Brisbane’s win will see them leapfrog the Young Reds into second place in Conference A on the Foxtel National Youth League ladder.

Ryan Strain had the first sight at goal for the Young Reds, curling his shot from 20 yards, to only be denied by the crossbar. However, Roar controlled the majority of the first 45 minutes, several chances arose before an inadvertent handball inside the area granted the Roar a penalty, which opened the scoring 15 minutes in through D’Agostino.

The crossbar was the enemy of Adelaide for a second time, as a header from Josh Mori rattled the bar. Moments following an equalising opportunity for the visitors, D’Agostino scored his second, after a cut-back assist from Katebian.

Marc Marino attempted a first-time bended shot at Roar gloveman, Andre Jannese, but his effort went narrowly wide. The Young Reds’ first half endeavours were abolished, as Katebian latched onto a diagonal pass and netted the third for his side on the stroke of half-time.

In the 82nd minute, Anthony Dimas was fouled in the box, awarding a spot-kick chance for the Reds. Marino’s penalty shot was palmed away by Jannese, which then only assisted Warland to head in his second of the match, reducing the margin to one goal.

Adelaide United forced an onslaught onto their opponents, coming close again through Marino, rising high to win a header but steered it wide. But the Roar held on to claim a tight win, after withstanding United’s pressure in the latter moments of the game. 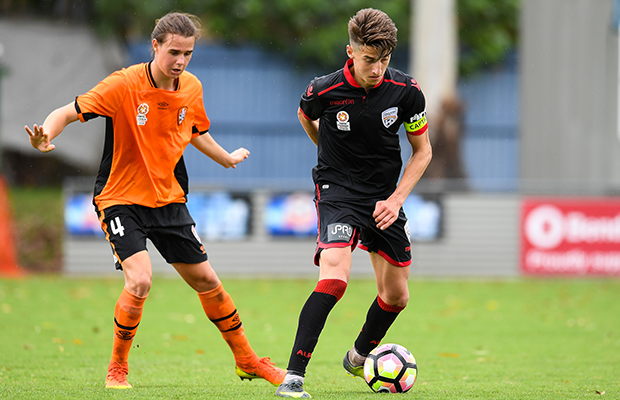