The Adelaide United Youth Team fell to West Adelaide 2-1 in Round 17 of the National Premier League on Sunday.

It was a wave of emotions at the Adelaide Shores Football Centre for the Adelaide United Youth Team, as what looked like a sealed three points, thanks to a superb strike by Dylan Smith, was overrun by West Adelaide’s dominance in the second half which saw them come back with two goals from Thomas Briscoe and John Karatzas.

The match started with both sides strong and with fast paced possession, but the Young Reds looked the more dangerous of the two. Blake Carpenter was consistent down the wing, his first promising run was made early and his shot was bound to go in, but was just off the mark. West Adelaide’s Ricardo Da Silva then struck back, his shot just brushed the post also.

As the chances kept on, Smith’s dangerous cross was too long for Carpenter to get a hold of. Da Silva was quick to strike again but a strong Daniel Margush made a goal impossible with a brilliant save. Michael Alexandrou then tried to find teammate Briscoe but United defender Christopher Vivian cleared it to safety. 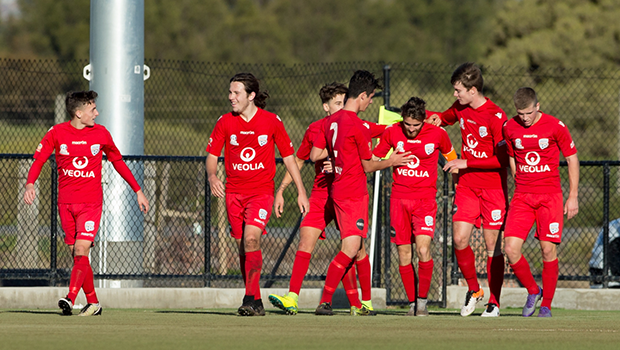 In the 11th minute, Smith rose to the occasion once again, his shot clear on goal, but was unfortunately deflected by an opposing defender. In the 14th minute, Joshua Mori swept through West Adelaide’s defence with a great run, but his attempted through ball had too much on it to reach a free Smith. Carpenter then crossed the ball in for Mori, whose volley was just off target.

20 minutes in, a dangerous Jordan O’Doherty made a run, but his shot was touched by Smith and the attack was ruled offside. Smith then took his own chance from close range but his strike was denied. In the 35th minute, an emphatic Smith was finally rewarded and his persistence brought him to tap in an assisted ball from Apostolos Stamatelopoulos.

It remained even sided as the second half commenced, but it didn’t take long for West Adelaide to bring on the pressure of their attack which proved to be paramount despite Margush’s efforts. Briscoe tried from long range, but his shot did not unease Margush.

In the 64th minute Perry Mitris went for a chance on goal, but Margush cleared the ball with a diving save. In the 68th minute, Briscoe found space to level the game, after Reds defence were unable to clear the ball out of danger.

Blue and White dominance continued, as Karatzas gave his team a 2-1 lead with a forceful strike in the 77th minute. The Young Reds pushed for another goal, as Riley Mcgree blasted through midfield to find Stamatelopoulos, but was offside. They were unable to claim any points before the end of the 90 minutes.

Following the match, Head Coach Mark Jones, was disappointed with his team’s second half performance and their many chances not being taken, which could have seen them take out the win.

“We didn’t take our chances, we had four or five good ones that could have been goals to wrap the game up,” Jones said. “But we did make some poor crosses and executions.

“Poor defensive lapses gave the game away, and we just dropped off in the second half and lost the composure we had in the first half.

“It will be very difficult now to play for the finals but we will just move forward from this and focus on next week.”