A spirited Adelaide United have suffered an agonising 2-1 loss to Chinese outfit Jiangsu Suning in their AFC Champions League clash at the Nanjing Olympic Sports Centre on Wednesday night.

A goal in either half from Alex Teixeira was enough to secure all three points for the home side, with Eli Babalj heading home what proved to be a late consolation for the visitors.

After a promising start the Reds conceded a soft opener following a mistake from goalkeeper Daniel Margoush but fought their way back into the contest especially in the second stanza.

Baba Diawara and Nikola Mileusnic both had gilt edged chances for an equaliser, while Tarek Elrich had a goal chalked off for what appeared to be a marginal offside call. 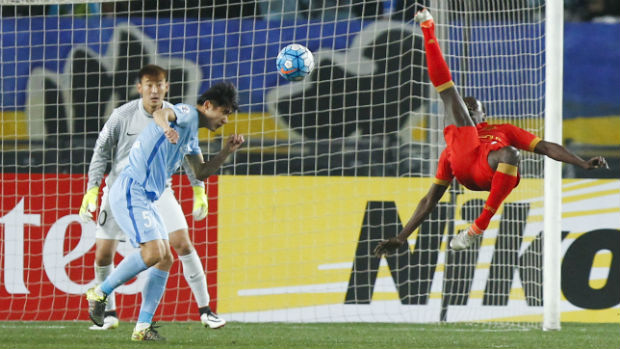 Instead Jiangsu netted a superb second on the break through their Brazilian star and while Babalj pulled a goal back late on the Reds were unable to make the most of another chance at the death.

The result leaves Adelaide at the bottom of Group H following match day 2, with their next challenge to come at home against Korea Republic outfit Jeju United.

Reds goalkeeper Daniel Margush spilled what should’ve been a regulation save following a speculative shot from Brazilian midfielder Ramires which allowed his compatriot to poke home from close range.

A swift counter attack saw Teixeira do it all himself, flying down the left wing before dancing his way around Dylan McGowan and threading his shot through the legs of Margush.

The substitute headed home a brilliant ball into the box from Tarek Elrich deep into stoppage time after getting the better of a couple of Jiangsu defenders in the air.

The Reds thought they had an equaliser when Tarek Elrich volleyed inside the far post following a flick on but the goal was ruled out for offside. Replays suggest the call was marginal at best and the home side doubled their advantage less than a couple of minutes later to break Adelaide hearts.