Adelaide United Assistant Coach, Pau Marti, and midfielder, James Holland, have revealed they are prepared for whatever the Wellington Phoenix throw at them, ahead of the Reds’ crucial Round 9 clash at Coopers Stadium on Sunday.

The Reds remain winless to start the campaign, collecting three draws in the opening eight rounds, which is uncannily the same number of points amassed at the same stage last season.

Adelaide recorded a goalless draw in the Harbour City against ladder leaders Sydney FC last weekend and will be hopeful of building on from their promising performance. Meanwhile, the Phoenix suffered a 2-1 away loss to Melbourne City at AAMI Park and are situated in ninth place on the league table.

Marti said the clash against the Phoenix is an extremely important match and stressed the team have been delivering some auspicious performances with little reward.

“I think it’s very important because Wellington is ahead of us by three points so if we win we can go ahead (on goal difference),” Marti said.

“It’s not that we aren’t performing… in football terms we’re in a position which isn’t where we want to be, so to get a win would be a good reward for the previous weeks (of playing well).”

Marti also revealed the side are prepared for whatever tactics Wellington decide to employ, and believes they are more than just a “counter-attacking team”.

“I think they (Wellington) want to win because they aren’t in a position to get one point so I think they’ll come here to get three points,” Marti said.

“And they’ve got quick players and good players in midfield, so they’re not just counter-attacking and we’re prepared for whatever will happen.”

The Reds have won their last two games against Wellington, scoring an impressive seven goals without conceding in those fixtures. 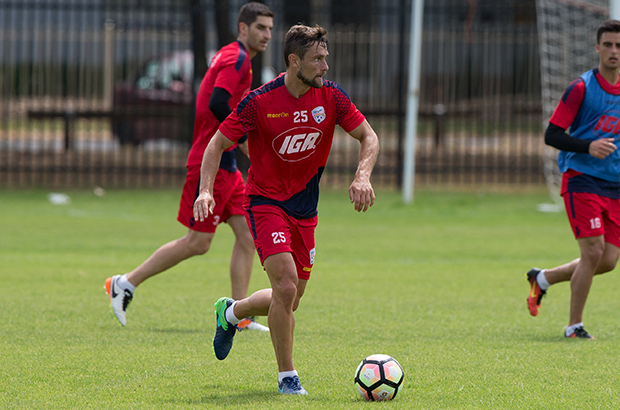 Moreover, United boast a formidable record when hosting the New Zealand based outfit, triumphant in five of their previous six home matches. Impressively, the South Australians have further scored three goals or more on four occasions during that span.

With boss, Guillermo Amor, suspended from the sidelines for another week, Holland explained the loss of the Spaniard in the technical area will not be a distraction.

“For us, to be honest, we do a lot of the talking prior to getting to the stadium, so for us the coaches leave us alone to do our own thing and prepare for the game,” Holland said.

“It’s not too much of a difference if we have Pau or the coach (Guillermo Amor) there, Pau will give us some messages at half-time which is what Guillermo does.”

Holland also admitted it was time the midfielders in the team helped contribute from a goal scoring perspective, as the Reds have netted just seven goals in eight matches this season.

“I think last week (against Sydney) we did really well defensively for the first time, under a lot of pressure we were quite compact,” Holland said.

“Now we just have to start taking our chances, but boys like us in the midfield should definitely start contributing.

“But that goes for the whole team as well, I think everyone needs to step up.”

The 27-year-old confessed it was frustrating being at the foot of table and stated the Reds’ fortunes will change if they play to their maximum.

“At the end of the day you play to win regardless of who you’re playing against so it doesn’t sit well if you’re coming last,” Holland continued.

“Of course we’ve had some bad luck, but you can only look at yourself so it leaves a bit of a bad taste in your mouth.

“I think our performances probably don’t justify our position on the table at the moment, but that’s football so if we keep doing what we do best the results will turn.”

Adelaide United host Wellington Phoenix in Round 9 of the Hyundai A-League 2016/17 season on Sunday, 4 December at Coopers Stadium. Kick-off is at 6.30pm ACDT.