Sergio Cirio was the hero for the home side after he converted from the spot in the eighth minute of stoppage time after Michael Theo was sent off with full time imminent.

The Roar goalkeeper was marched for making contact with an opponent’s head and with the visitors having already made their three substitutions midfielder Thomas Kristensen pulled on the gloves for the resulting spot kick but was unable to keep it out. 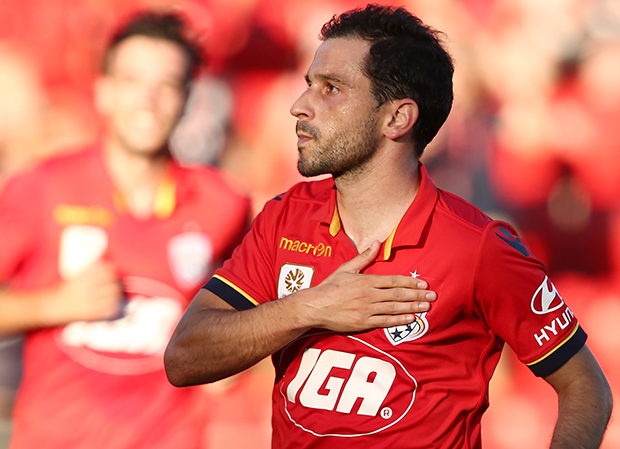 The Reds were themselves already down a man after Marcelo Carrusca picked up a second booking with eight minutes remaining.

Earlier a maiden Hyundai A-League goal from Reds striker Papa Diawara put Adelaide ahead in the first-half in humid conditions in the City of Churches.

The Senegalese striker’s header was cancelled out by Jamie Maclaren’s 14th goal of the campaign on the hour mark, after Roar’s frontman finished off a well worked team goal.

Roar looked the more likely to grab a late winner against a depleted Reds in the closing stages but with the match headed for a draw Theo’s inexplicable moment of madness cost his side dearly.

The result means fourth-placed Brisbane remain just a point in front of Perth ahead of their clash against Victory next weekend, while the reigning champions can move off the bottom of the ladder when they travel to Gosford to face the Mariners in Round 24.

Catch up with all the action at the match centre here

Marcelo Carrusca whipped in a corner ball to the front post where Diawara had got goal side of Jade North and was able to head strongly past Theo.