Adelaide United is delighted to officially announce the signing of Spanish forward, Sergio “Sergi” Guardiola, on a season-long loan deal.

The 25-year-old joins Guillermo Amor’s squad from Spanish La Liga side, Granada CF, after playing 19 matches for Granada B in 2016, scoring eight goals.

Starting his senior career with Lorca Deportiva CF, Guardiola soon joined former Segunda División B club, Jumilla CF, where he notched up 42 appearances and two goals between 2010 and 2012.

After his spell with Jumilla CF, Guardiola joined Ontinyent CF for the 2012/13 season before signing with Getafe CF B in 2013 and then Novelda CF for 2013/14. During this period, Guardiola made a total of 57 appearances and scored 10 goals.

Guardiola said he was very happy to sign for the current Hyundai A-League Champions, promising goals in his first season outside of Spain.

“My first feelings about moving to Adelaide are very good,” Guardiola said. “Everything has been comfortable with coming to the Club and all the people have been very welcoming.

“When Guillermo (Amor) won the league with Adelaide, there was a lot of coverage about it in Spain.

“Then, after I started talking with the Club, I started to follow the team more and more and looked at the history of the team a little bit. 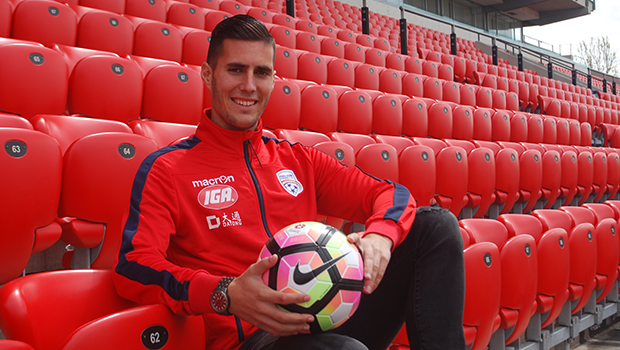 “You can see the A-League is a competition that is developing and to have joined the Champions is very exciting.

“I want the people to know that I am here as a 25-year-old who is looking to score lots of goals and to win games with this Club.

“This is a big step for me and I’m here to work a lot because I want to get the best out of my time with Adelaide United.”

The forward’s new Head Coach and fellow countryman, Amor, said Guardiola was a player Adelaide United’s Football Department took their time to discover and are delighted to have secured someone of his quality.

“Sergi is the type of player we were wanting to bring to our team and to have done this is very good,” Amor said.

“Before signing Sergi, we took our time to look at the many different options we had available and we believe he is the perfect fit for us.

“He is a player with many strong qualities who reads the game very well, but can finish even better.

“We know this will be Sergi’s first time playing outside of Spain, but we are confident in his ability and we know he can score our team goals.

“He is still young and is still developing with his football, but Sergi will fit in well with our team and our football.”

You can meet Sergi at Adelaide United’s 2016/17 Home Jersey Launch on Saturday between 12pm and 4pm at the AUFC Store (corner Manton St and Holden St, Hindmarsh).