Reds on target in 3-0 win over Kuala Lumpur FA

Adelaide United’s young brigade took the plaudits as the Reds got their Malaysian tour off to a winning start, comfortably seeing off Kuala Lumpur FA in a friendly at Sime Darby Football Field.

In warm, humid conditions the Reds took charge of the match from the opening whistle, controlling possession and testing the Kuala Lumpur defence as McGree forced Norhadi Ubaidillah into a smart save after seven minutes.

The youngster didn’t have to wait long for another chance, and gave United the lead with a neat left-foot strike from 15 metres after some good build-up pay by Ryan Kitto. 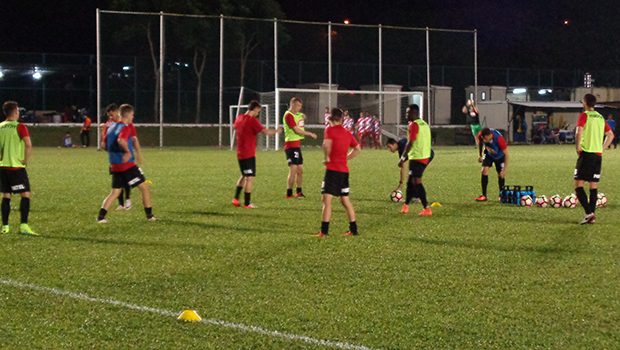 New signing Henrique was introduced to the action as a half-time substitute and looked lively in his first outing in Adelaide United colours, while fellow recruits Ben Garuccio and Jesse Makarounas looked at home in the starting eleven.

When Isaias came within inches of recreating his A-League Grand Final free kick heroics, and was denied by the cross bar on the stroke of full-time, it appeared that the score wold stay at 2-0, but Ryan Kitto added a third in the final moments.

Kitto – a constant threat throughout for the Reds – put the icing on the cake in injury time, capitalising on a loose ball in the penalty area to round the keeper and give the A-League champions a deserved 3-0 win.

The Reds next assignment is Malaysian Super League outlet Penang FA on Saturday.

“It’s always a good feeling (to score), and always good to contribute to the team and get a good result.”

“(Kuala Lumpur FA) were a good side. The weather’s a bit different here, but we’re getting used to it and it will hopefully prepare us for the season ahead.”

“It’s definitely has been difficult to adjust to the Malaysian conditions). It makes you sweat more and burns the lungs, but we dealt with it well tonight.”

“I think we’re preparing well. We’ve got a good squad and maybe a few more getting added soon, so I think we’ll do well.”